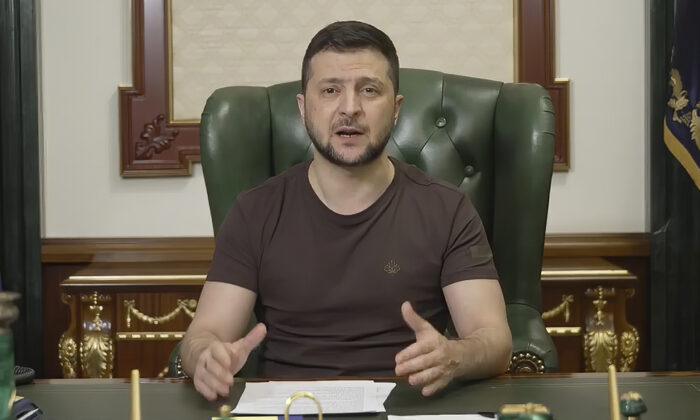 In a televised address, the Ukrainian president again accused Russia of war crimes and spoke of the importance of holding the Kremlin accountable for its actions.

“Humanity has come through 161 points of (no) return,” he told an audience at the Australian National University on Wednesday.

“The world has … a choice. To recognise the Russian Federation as (a) terrorist sponsor.

“You cannot hide from this choice, you cannot somehow avoid it.”

He said Russia had lost the veil it used to try to shroud itself as a “peacekeeper” as it continues to commit atrocities across Ukraine.

“We have seen horror movies but I never thought the realities in Ukraine would be more scary.

“The difference between terrorists and Russia is terrorists hold themselves accountable for their actions, and Russia cannot do even that as (they) try to accuse other people of their atrocities,” he said.

“They gave the chance to the following generation not to live as isolated but to live among the civilised people and to be on the same high level of life.

“Russia will have this opportunity for sure.”

“I would like China to join the unified world position (recognising) the tyranny of Russia against Ukraine, in whatever way it would happen,” he said.

“For now, China is balancing and indeed has neutrality, and I will be honest, this neutrality is better than China joining Russia. It’s important for us China won’t help Russia.”

Sonia Mycak, a research fellow at the university’s European studies centre, said it is important Australians hear directly from the man navigating “the most profound geopolitical crisis since the Second World War” as Kyiv pushes to maintain international support.

Zelenskyy has addressed university students in the US, Britain, Canada and Japan as well as Ukrainian high school students who fled the country.

“He is very honest and direct when he speaks to all kinds of audiences,” Mycak told AAP.

“This kind of genuine, honest and direct behaviour has been instrumental in maintaining morale in Ukraine. It’s helped him mobilise the support of other nations.

“Putin is counting on the West, becoming tired of this and waning in their support. That’s what he’s hoping will happen, and it’s very important that doesn’t happen.”

The president called on the audience to share his message with others across social media and networks to dispel Russia’s disinformation campaign.

“You have an opportunity to show the truth about Ukraine that will help us indeed,” he said.

The address by the Ukrainian president comes after he addressed the Australian parliament in March, and Prime Minister Anthony Albanese visited Kyiv last month.