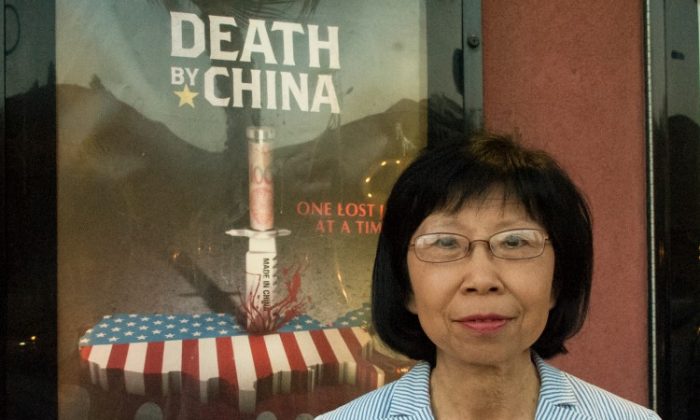 Peter Navarro (L) director of “Death by China,” with Jane Xenos and John Simmons, both independent business owners who were impressed with the show and its balanced message. (Robin Kemker/The Epoch Times)
Entertainment

LOS ANGELES—The movie “Death by China: One lost job at a time” is an eye-opening exposé of China’s economic devastation of American manufacturing. It is an emphatically frank documentary, supported by experts and congressional lawmakers who have been unable to turn the tide in favor of America’s manufacturing base and its labor force since Kissinger’s détente brought China into the World Trade Organization.

However, China could not have done it alone. America’s multinational corporations left home with their technology and capital, leaving 72,000 empty factories and a devastated workforce of some 25,000,000 unemployed. Others chose to only expand their sales market into China, some with unexpected results.

The movie, directed by University of California, Irvine, professor Peter Navarro, professor of Economics and Public Policy, is based on his 2011 book (with Greg Autry) by the same title.

The movie had an exclusive screening with a dozen experts in China issues on Aug. 17 at the Laemmle Playhouse 7 in Pasadena, Calif. It was a full house.

Jane, a medical practitioner in the audience said, “It was a very balanced documentary.”

Navarro starts his production in a shopping mall on Black Friday. Individual buyers are asked what they purchased and why they made the purchase. They were then asked, “Where was that item made?” Their responses are interesting and reflective of how our economy has fed “Made in China” acceptance. Some sheepishly give excuses, while others remain quiet.

It isn’t much different than Fortune 100 companies, which merely respond, without any regret at leaving America, “It’s just business. We are accountable to the board.”

As Americans, we might want to ask ourselves, “What companies is my pension plan invested in? Are we any different than those buyers or manufacturers?”

A blunt assessment is made of China and its lack of accountability to its WTO membership agreements. Where competitive advantages exist by unfair official subsidies via tax rebates on exports or lack of internationally accepted laws such as workplace safety, age of workers, and pollution, there is recourse using tariffs to balance competition between various countries for the same products. However, this has too seldom been done with China.

Wal-Mart has become China’s U.S. product retailer. According to the documentary, former prisoners of conscience, including detained Falun Gong practitioners, and other China gulag victims cringe upon coming to America when seeing Nestle and other promotional and Christmas season products they made during their 10-hour-or-longer shifts in Chinese labor camps.

China uses several very advantageous “subsidies” to make their products more affordable for export. Many companies are state-owned, that is they are owned by the Chinese Communist Party (CCP), for the benefit of the CCP members involved. They thus receive additional perks from the regime to export.

An exposé of unenforced labor laws indicates that China has the worst air pollution in the world. It not only kills Chinese, but the pollution is dispersed around the entire globe.

China also has no workplace safety laws, healthcare requirements, or overtime pay requirements.
The list becomes longer with child labor, slave, and prison labor promoted in state-owned facilities, thus padding the pockets of local CCP cadres and bringing costs down significantly to undermine other economies around the world.

China also utilizes currency manipulation, which has been an advantage to its competitiveness. Many U.S. presidents have threatened action, but none have acted on it.

Counterfeiting, piracy, and outright confiscation of American-based companies in China is taking place. The costs to foreign businesses are staggering in any one of these categories. Who would have thought that Google would run home—having been outsmarted by the CCP?

According to the Global Intellectual Property Center, China continues to be the number one source country for counterfeit and pirated goods seized, accounting for 62 percent or $124.7 million of the total domestic value of seizures in 2011. But the impact to retailers is much higher than that number. According to the International Trade Administration only 1 percent of all goods entering the country are inspected.

Such counterfeit goods are not only affecting consumers, however.

“In March 2009, a NASA administrator explained to the U.S. House of Representatives Science and Technology subcommittee that the discovery of counterfeit parts was partially to blame for out-of-control costs and may have contributed to the nine-month delay of the Kepler spacecraft launch. He said, ‘We [could] find out about it [counterfeit parts] while sitting atop a rocket or, worse, find out about it in space,'” reported the Aero-News Network in March 2009.