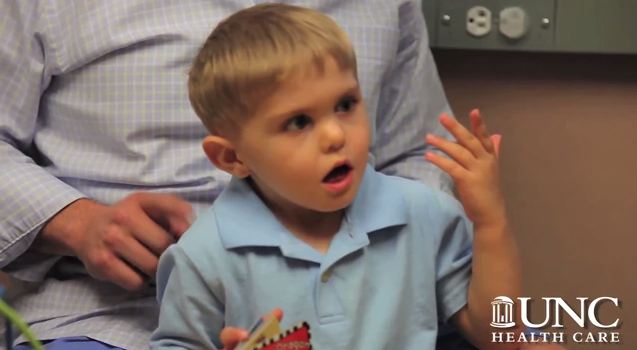 3-year-old Grayson Clamp of Charlotte, NC is the first child to receive an auditory brain stem implant, which allows him to hear and likely to eventually speak well. (Screenshot UNC Health Care)
Science

Deaf boy hears dad: A three year old became the first child in the United States to get a new kind of implant as part of an experimental trial, and can now hear.

Grayson Clamp of Charlotte, North Carolina got an auditory brain stem implant at UNC Hospitals as part of an investigational trial

“We’re bringing the potential of hearing to a child that can’t hear and has no other options,” said Craig Buchman, ear, head, and neck surgeon at UNC.

The surgery is done through an incision behind the ear, through which a small window of bone is removed. The surgeons then go down and open up a plane between the bone and brain, and go deeper into the brain to the cochlear nucleus, where the brain usually gets information from but in deaf people doesn’t. They then take a small paddle or electrode and lay it directly on that area, and the cable hooks up to the receiver.

“Instead of traveling through the ear, sound information travels through the cable and stimulates the brain,” says UNC in a video. “The processed sound gives Grayson the ability to hear.”

Grayson had the procedure done on him in late May, but the UNC Health Care posted the now viral video on June 20.

Grayson, who was adopted by Clamp and his wife Nicole, will undergo several years of special hearing and speech therapy.

“He is a very determined little boy,” Nicole Clamp told local broadcaster WRAL. “He makes up his mind, he is going to do something. He’s going to do it.”

UNC Hospitals is part of UNC Health Care, a non-profit medical system owned by the state of North Carolina.

The auditory brainstem implant is being investigated by the Food and Drug Administration for wider application in restoring hearing to deaf children. It was developed by the Los Angeles-based House Research Institute, which received approval from the administration for a clinical trial in January.

More than 1,000 adults worldwide have received hearing through the procedure and device.

“This will be the first FDA-approved trial of its kind, and represents a major step forward to bring a sense of hearing to deaf children in the U.S. who are born without a hearing nerve or cochlea (hearing organ) and therefore are unable to benefit from hearing aids or cochlear implants,” said Neil Segil, Ph.D, executive vice president for research, House Research Institute, in the January announcement.

The trial includes the University of Verona Hospital in Italy, which is looking at expanding the procedure to children around the world. The auditory brainstem implant (ABI) procedure has already been used successfully on children in Italy and in other parts of Europe, although the procedure doesn’t work for everyone. Most people who have neurofibromatosis type 2, a genetic defect that results in deafness, who have received ABI “cannot identify words or sentences with only the sound from the ABI—a few patients have more than 20% word understanding,” writes Robert Shannon, head of the auditory implant research laboratory at the House Research Institute, in a 2011 analysis of the procedure.

Investigations continue to look at the large differences in performance across patients with the implant, according to Shannon. Children are believed to be one group that can benefit the most, though.

“These children have never heard sound before, so their brains don’t know at first what to make of the neural signals coming in from the ABI,” said Shannon, an investigator for the clinical trial, and who has been a leading scientist in the development of ABI device technology beginning with the first ABI for adults, in the announcement. “The pattern of information the ABI delivers to their brains is very different from the natural acoustic pattern. Yet their brain is eventually able to make sense of the information and many learn to speak and understand sounds. This demonstrates the amazing power of the brain to learn new patterns of information.”