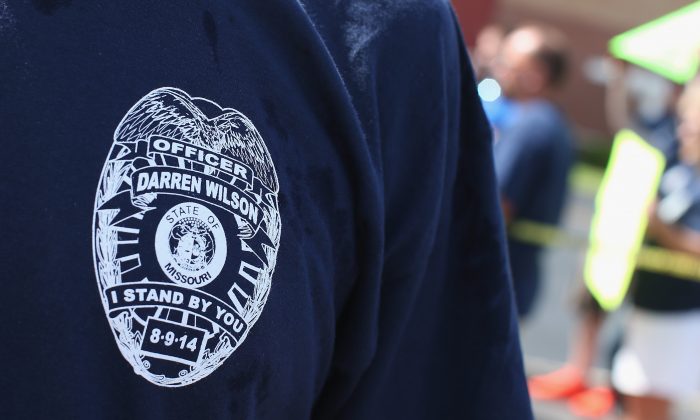 Photos that purport to be of Darren Wilson with serious face injuries are fake.

The photos are accompanied with claims that teenager Michael Brown attacked him. The claims read: “He was attacked and punched in the face before he emptied his weapon into the drugged ‘unarmed teenager,’ this is what a broken eye socket looks like.”

The photo was actually of now-deceased motocross rider Jim McNeil, as seen below:

What Darren Wilson claimed to have. MT @YourAnonNews: this is what an actual orbital eye socket fracture..looks like pic.twitter.com/9vUhuyUjbY

The real photos of Wilson came out on Monday night, showing his injuries.

A few months ago, Fox News reported that he suffered a broken eye socket, which was later refuted by CNN and other media outlets.

#Ferguson Darren Wilson after the Mike Brown murder. Where is the broken eye socket? But we should accept the “facts” pic.twitter.com/SjO1ugAUPi

Brown family blasts prosecutor’s handling of case
FERGUSON, Mo. (AP) — Missouri’s governor ordered more National Guardsmen into Ferguson on Tuesday to keep order after a night of violence over the grand jury decision in the police shooting of Michael Brown, as attorneys for the Brown family blasted the authorities’ handling of the case.

Smoke billowed from burned-out Ferguson businesses on Tuesday and glass littered the sidewalks from display windows that were smashed during the protests that erupted after it was announced that police Officer Darren Wilson wouldn’t be indicted for killing Brown on Aug. 9.

Monday night’s protests were far more destructive than any of those that followed Brown’s death, with more than a dozen businesses badly damaged or destroyed. Authorities reported hearing hundreds of gunshots, which for a time prevented fire crews from fighting the flames.

Gov. Jay Nixon issued a statement saying he was calling in more National Guard troops to assist law enforcement in Ferguson, but he didn’t say how many additional troops or how long they would remain.

Jon Belmar, chief of the St. Louis County police, said that unless his agency could bring in 10,000 officers, “I don’t think we can prevent folks who really are intent on destroying a community.”

At least 18 people were injured and sought treatment at area hospitals, including someone who was shot and recovering Tuesday at SSM DePaul Health Center. The hospital didn’t give any details about the shooting. Two other people were admitted to Barnes-Jewish Hospital for undisclosed injuries. Everyone else was treated and released.