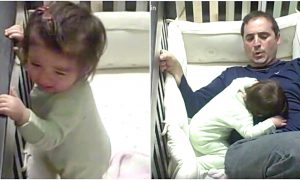 This singer is cool out of the mouth of babes!

Coffey Anderson, a country singer from Bangs, Texas, tours constantly. He performs on stage, for rodeos, fairs, private events, festivals and more. He also works as a commercial actor, scoring gigs with Taco Bell, Disney and Blue Cross Blue Shield. While he was performing one night, an unlikely dancer took the stage — looks like his son wanted to be on stage with his father.

While Anderson is on stage performing a song, his son Ethan wanders onto the stage. As he sings, his son wraps his arms around Anderson’s legs. Entranced by his voice, the baby begins to dance and sway along to Anderson’s song.

“I was playing onstage, and my little boy who dances when I play guitar at home got away from the backstage and stormed the stage,” Anderson wrote. “First he hugged me then he danced like he was free!”

Ethan dances along to Anderson’s cover of “Brown Eyed Girl” not shy of the hundreds in the audience. Ethan keeps moving to the music and dances along with his dad’s song. At the end he runs up to Anderson and dances next to him. Looks like Ethan may have a career in show business too, or just has the heart for the stage!