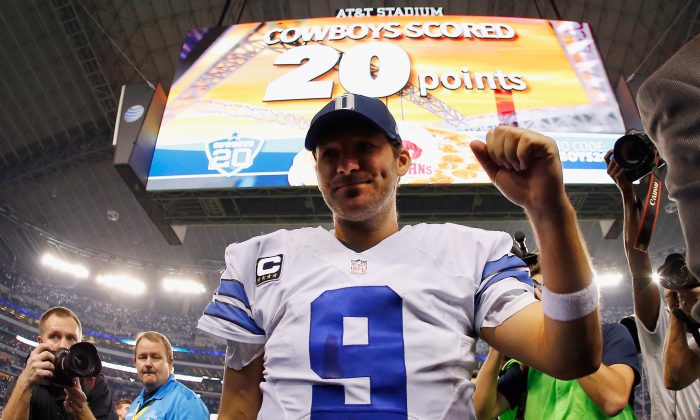 Quarterback Tony Romo #9 of the Dallas Cowboys walks off the field after the Cowboys beat the Detroit Lions 24-20 during a NFC Wild Card Playoff game at AT&T Stadium on January 4, 2015 in Arlington, Texas. (Photo by Tom Pennington/Getty Images)
NFL

The Dallas Cowboys are preparing for their upcoming playoff game as the news and rumors ramp up.

Dallas is going to be the underdog in Green Bay, with the Packers opening the week as 6.5-point favorites.

However, Bleacher Report notes that the Cowboys could cover the spread.

“Dallas gained new life in the second half of last week’s victory against the Lions, rallying back from a double-digit deficit and holding them to only three points after the intermission. The Cowboys seem to be a team of destiny in some respects, whether you look at their success away from home or the breaks they get at AT&T Stadium, where the referees helped them beat Detroit,” it said.

“As a Wisconsin native, Dallas quarterback Tony Romo grew up a Green Bay fan and should be motivated to earn his second career win at Lambeau and first road victory in the postseason.”

But the Packers can also cover the spread.

“The NFC North-champion Packers dominated opponents at home during the regular season, averaging nearly 40 points per game. They have also gone 3-0 straight-up and ATS in the last three meetings with the Cowboys and 5-2 SU and vs. the line in their previous seven home games against NFC East opponents,” Bleacher noted.

“Green Bay quarterback Aaron Rodgers needed the extra rest of the bye week to recover from a calf injury and should be able to take advantage of a Dallas defense that suffered some key injuries of its own in the playoff win against the Lions. Even at less than 100 percent, Rodgers helped the Packers defeat Detroit 30-20 and cover the spread as eight-point home favorites to win the division in Week 17.”

Allegiances to the Green Bay Packers and Dallas Cowboys are split in one Wisconsin community.

Sunday’s playoff game between the two teams has people conflicted in Burlington, a city of about 11,000 south of Milwaukee. It’s the hometown of Cowboys quarterback Tony Romo.

Owner Fred Mabson says it’s a tough call when the Packers play the Cowboys. Mabson says he’s a Packer fan, yet friends with the Romo family.

The Packers haven’t faced the Cowboys during a playoff game at Lambeau since the “Ice Bowl” in 1967.

The Cowboys face the most difficult road to the Super Bowl they ever have, according to a new report.

“No Cowboys team has ever attempted anything as difficult as the road looming before this one,” wrote Kevin Sherrington of the Dallas News.

“First and foremost, there’s no road game as daunting as the one this week in Green Bay, where the forecast for Sunday would stop Admiral Byrd in his tracks. Ask any Ice Bowl Cowboy about Lambeau Field. For some, the numbness remains, and not just in their toes.”

And if they win, the Cowboys will likely face the Seattle Seahawks, in Seattle.

The good news is that Dallas has already won once in that stadium this season. But the Seahawks have lost there only twice in the last three seasons. But the Cowboys are 8-0 on the road.

And if the Cowboys did make it to the Super Bowl, they’ll likely be facing a tough team such as the Denver Broncos or New England Patriots.

But Sherrington has hope that it can be done.

“If they somehow find themselves in Glendale, Ariz., come February, mark it down. No Cowboys team ever took a harder road,” he concluded.

Cowboys defensive coordinator Rod Marinelli has worked hard at getting his defense to force turnovers, and the hard work has paid off–Dallas has forced a turnover in 16 consecutive games.

And the team is 10-0 when forcing at least two turnovers in a game this season.

Marinelli noted that the team should be given credit.

“You hold people to a certain standard of how we’re going to play. A lot of people give lip service in the offseason, but as the season goes on, they don’t stress it as much,” Marinelli told ESPN.

The Cowboys forced three turnovers in the win over the Lions.

“We’re just relentless on it. As soon as you don’t emphasize it, you don’t do it,” Marinelli said. “Sometimes, you can have a game where you don’t get any, but the strip attempts are there. I keep looking for strip attempts. If you have enough attempts, eventually you’re going to get it out. If the attempts aren’t there, there’s no way it’s coming out.”

They’ll have a tough time against the Packers, who tied New England for the fewest in the league at 13. QB Aaron Rodgers hasn’t thrown an interception at Lambeau Field since 2012.