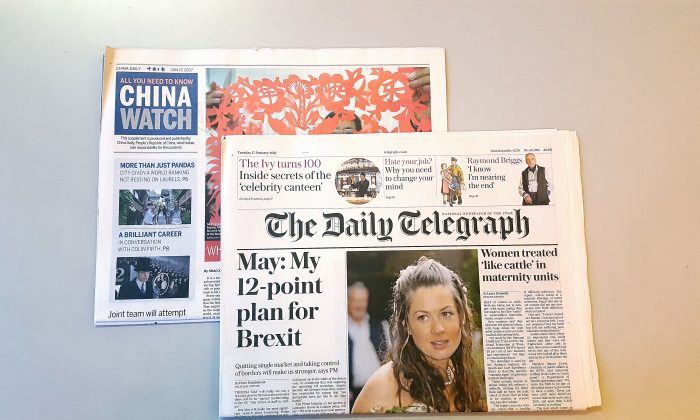 The Chinese Communist Party is well known to fund “soft power” to influence other countries, and its deal with the UK’s Telegraph newspaper is a salient instance of this pattern. The Telegraph’s China Watch supplement is edited by China Daily, a newspaper controlled by Chinese propaganda authorities.

In 2015, China Daily made a “new online content agreement” with the Telegraph Media Group, creating a China Watch micro-site on the Telegraph’s website.

Text at the top of the site informs readers that: “This content is produced by China Daily, People’s Republic of China, which takes sole responsibility for its contents.”

When asked whether they were comfortable carrying content that is known to be CCP propaganda, a Telegraph spokesperson said in an email that the Telegraph did not wish to comment.

The Telegraph’s China Watch content is also replicated in similar forms in the Washington Post, Wall Street Journal, Le Figaro in France and The Age in Australia.

The Telegraph has previously been in the spotlight for printing stories that collude with advertisers when their former chief political commentator Peter Oborne resigned in 2015. He said that stories about HSBC, China and Tesco were not given enough prominence because of commercial interests.

He noted in his resignation that the newspaper’s comment on the 2014 Hong Kong protests was “bizarre” compared to other media.

“The Financial Times, the Times and the Guardian all wrote powerful leaders on the refusal by the Chinese government to allow a committee of British MPs into Hong Kong. The Telegraph remained silent. I can think of few subjects which anger and concern Telegraph readers more,” Oborne wrote.

He continued: “On 15 September [2015] the Telegraph published a commentary by the Chinese ambassador, just before the lucrative China Watch supplement. The headline of the ambassador’s article was beyond parody: ‘Let’s not allow Hong Kong to come between us’.”

A web search shows that Liu Xiaoming, Chinese Ambassador to the UK, has authored at least 23 articles on the site since 2010, with Fu Ying, the previous ambassador also penning at least seven pieces in her time. Topics include “China not to blame for UK’s steel crisis” and “Tibet is a better place than it used to be”.

An article published both in the Telegraph’s China Watch printed insert and on the microsite on 17 January 2017, attacked and slandered classical Chinese dance company Shen Yun Performing Arts, in particular for its ties with Falun Gong, a spiritual discipline that has been violently persecuted in China since 1999.

Shen Yun states on its website that its dancers practise the meditation discipline, which they identify as the source of inspiration for their art. Epoch Times has for years covered Shen Yun and its development, including attempts by Chinese diplomatic representatives to prevent elected officials around the world from attending.

Liu Wei, director of the Falun Dafa Association UK, the promoters of Shen Yun in the UK, said: “As a group demonised and brutally persecuted by the communist regime, we know firsthand how its propaganda can incite hatred towards the people the regime targets, and trick honest people into turning a blind eye to what’s happening in China today.”

He added: “We are surprised that the Telegraph is comfortable with carrying state propaganda that turns truth on its head, and seeks to perpetuate the marginalisation, isolation and hatred of a vulnerable group that is violently persecuted in China to this day.”

In an email seen by Epoch Times, the Telegraph’s Chief Executive Murdoch Maclennan responded to complaints from the Falun Dafa Association UK. “Telegraph Media Group is only the distributor of China Watch. We have no input into, or control over, the editorial content. We make that very clear both in the printed copy and at the top of each page online by stating: ‘This content is produced and published by China Daily, People’s Republic of China, which takes sole responsibility for its contents’,” he wrote.

“Your next step should therefore be to take the matter up directly with the publisher.”

Matt Wilson, a spokesperson for the Advertising Standards Authority said: “All UK media have to abide by the UK Advertising Codes, if an ad is within our remit, and if we think there’s a problem we will launch an investigation.”

Since the complaint to the Telegraph, it appears that the article attacking Shen Yun has been taken down from the Telegraph’s China Watch microsite.

Offered another opportunity to comment, a spokesperson from the Telegraph again declined.