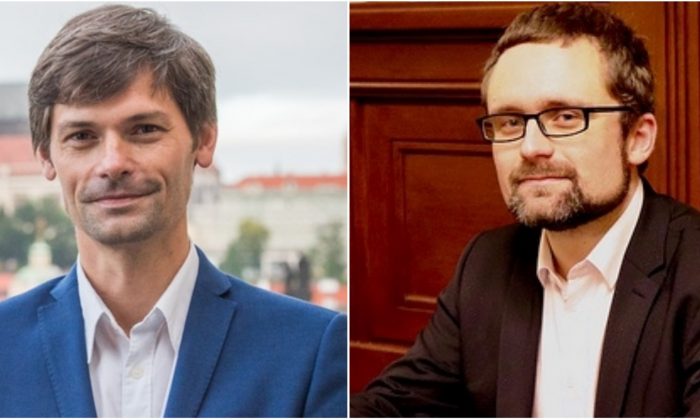 (From left) Czech Senator Marek Hilser and Member of Parliament Mikulas Peksa work together to prepare an amendment to the organ transplant law. (Screenshot from ceske-volby.cz/pirati.cz)
By Milan Kajinek

Czech lawmakers are finalizing a new law amendment intended to address organ transplant surgery practices in China. The law is the latest in a growing movement against involuntary organ harvesting from prisoners of conscience in China and human trafficking on a global scale.

“Senator Marek Hilser and I were shocked at how much the Chinese state trampled on its minorities ….We especially regard trade with prisoners as an absolutely immoral violation of fundamental human rights. We also want to send a clear signal that we, as the Czech Republic, reject such practices,” Member of Parliament Mikulas Peksa said on May 2 in an email interview with The Epoch Times about the proposed amendment to the transplant law.

It took nearly six months to prepare the bill, including researching similar laws being drafted in Canada or issued in Israel, and collecting information from human rights organizations, added Peksa.

The law was first proposed by Peksa and Senator Marek Hilser in response to a public hearing held on Nov. 19, 2018 in the Senate over forced organ harvesting from imprisoned Falun Gong practitioners in China for organ transplantation surgery.

The public hearing subsequently resulted in a resolution issued by the Senate of the Czech Republic on March 20 which calls on the Chinese regime to stop its persecution of Falun Gong practitioners, Christians, Tibetans, and Uyghurs; to release all prisoners of conscience; and to abide by international human rights conventions.

The push for an amendment to the transplant law is drawn from the Canadian bill S-240, and the organ transplant laws that have been adopted by Spain (2013), Taiwan (2015), Italy (2016) and Israel (2006). Recently, Australia is also considering the introduction of a new transplant law and the Belgian parliament voted unanimously for a new addition to the penal code that criminalizes unethical medical tourism.

The European Parliament passed a resolution in 2013 and the U.S. House of Representatives passed legislation in 2016—both condemning organ harvesting from non-consenting prisoners of conscience and religious and ethnic minorities, particularly adherents of Falun Gong.

The proposed law is particularly intended to curb the demand for organ transplants in China.

“We want the Czech government to clearly state which countries have problems with trafficking in organs, so that it makes it much more difficult to obtain an organ in that country. And yes, the People’s Republic of China is the country for which we came up with this approach,” explains Peksa.

Peksa recommends the proposed law should recognize certain countries that only allow voluntary organ donations—donors who are not forced or coerced in donating their organs. “This will create a simple map that tells a person who has decided not to use the well-functioning Czech transplantation system where they will then only be asked for a certificate from the hospital and where, on the contrary, the matter will be more problematic and they will be threatened with several years in prison.”

According to a survey carried out in the preparatory phase of the law, transplant tourism was found to be a marginal phenomenon in the Czech Republic.

Senator Marek Hilser, who studied medicine and international relations at Charles University in Prague, is also taking further steps in educating the public. On May 28, he will hold a debate about China and foreign policy in his local office, during which he will present Human Harvest—an award-winning film which documents an investigation of human organ trafficking in China.

“It is a public secret that China’s booming transplant industry is the result of taking organs from political prisoners, and the Chinese communist regime makes money from this. If we can not directly influence these crimes, it is our moral duty to adopt legislation to combat organ transplant tourism,” said Hilser in a press release on Jan. 14.

Mayor of Prague Zdenek Hrib spoke about the issue of the abuse of transplant surgery in China during an interview with NTD on Mar. 29. He said: “The role of the Senate in this field is much more important than the city of Prague, but I have to say that for me as a doctor, this practice is absolutely unacceptable. The violent harvesting of organs is a totally unacceptable topic and the international community’s response should be very severe in this respect.”

Since 2006, a number of experts have mapped out a sharp increase in transplants and trafficking in organs from the prison system in China, which according to experts, continues to this day. According to a number of experts, witnesses and medical staff, however, some religious and ethnic groups are persecuted and imprisoned in China and their vital organs are harvested in modern transplant centers. And the Chinese regime is behind the abuses.

“The Chinese totalitarian regime really keeps hundreds of thousands of political prisoners in concentration camps. A person in there becomes merely an organ carrier,” Czech Senator Pavel Fischer said during a session of the Senate on Mar. 20. “Organs are harvested from healthy, living persons to forward them on in the best quality possible.”

Fischer also commented on the speed with which organs are transplanted in China. “This inhumane machine is causing virtually no waiting time for organ transplantation in China. They are done much faster than anywhere else in the world. The body of such a donor is then declared dead. And if the transplant is not a success, there is basically another operation offered to clients during the warranty period,” said Fischer.

The mass killing of Chinese prisoners of conscience for their organs is well documented in the investigative reports “The Bloody Harvest” and “The Slaughter” and other reports by the non-governmental organization WOIPFG (Word Organization to Investigate the Persecution of Falun Gong), and ETAC (International Coalition to End Transplant Abuse in China), which is made up of a group of lawyers, academics, ethicists, medical professionals, researchers and human rights advocates.

Senator Vaclav Hampl said during a session of the Senate on Mar. 20: ”Unfortunately, it took a long time to get convincing information, but today we have no doubt that Falun Gong practitioners in China were and are, and possibly other groups of people, abused (for transplantation) and even on a very massive level.”

Milan Kajinek
Milan is The Epoch Times reporter based in Prague, Czech Republic, focusing on news from Central and Eastern Europe.