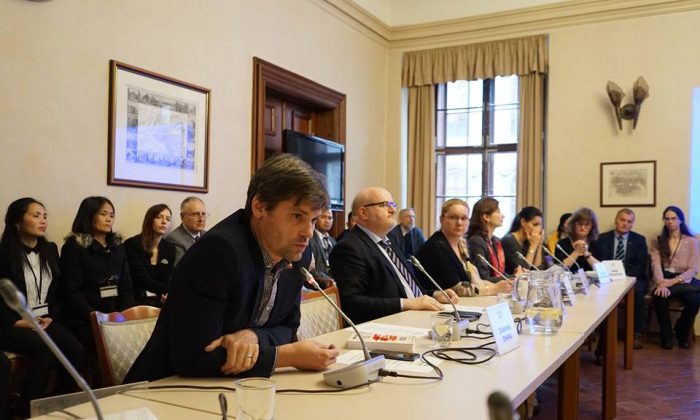 A public hearing on the repression of the Falun Gong spiritual movement in China held at Wallenstein Palace, Senate of the Parliament of the Czech Republic on Nov. 19, 2018. (Jiří Chlebníček/The Epoch Times)
By Milan Kajinek

PRAGUE—A nongovernmental organization has submitted a petition signed by more than 38,000 people to the Senate and the Chamber of Deputies of the Czech Republic, asking lawmakers to condemn the crimes against humanity committed by the Chinese regime.

The petition submitted to the legislative bodies is the most recent of several petitions. Since January, 2,000 Czech activists have collected more than 170,000 signatures of Czech citizens, public figures, and politicians. They are demanding an end to the violent repression of the Falun Gong spiritual movement at the hands of the Chinese communist regime.

In response to the petition, on Nov. 19, a public hearing was held at Wallenstein Palace and a seminar in the Chamber of Deputies, which were attended by experts, representatives of various nongovernmental organizations, and two victims of the persecution.

The first victim to testify was Chen Zhenping, who survived 13 years in Chinese labor camps where she was imprisoned for her belief in Falun Gong. The other was Yumei Liu of Liaoning Province in China, who was arrested nine times and tortured as part of so-called “re-education” led by the Chinese Communist Party (CCP). Her sister, father, mother, and husband were killed during the repression.

The Chinese Embassy in Prague was invited to attend the public hearing, but didn’t respond to the invitation. The secretary of the Senate Committee called the embassy, which stated, “We take note of the invitation.” However, the embassy representative didn’t show up at the hearing.

A representative of the international human rights organization Amnesty International also was at the public hearing.

According to a statement by Amnesty International: “Falun Gong is a spiritual teaching based on traditional Chinese breathing and meditation exercises, which gained a large number of supporters in China during the 1990s. Practitioners focus on the cultivation of character by following spiritual principles such as truthfulness, compassion, and tolerance—the universal principles of human existence. Falun Gong combines mental cultivation with physical cultivation (using five simple exercises).”

During the hearing, a representative of the Falun Gong Association of the Czech Republic, Juraj Skovajsa, discussed the rapid increase in the popularity of Falun Gong in China from 1992 to 1999, and illustrated the exercise movements and the spiritual principles of the practice. He also cited a medical study pointing to the health benefits of the Falun Gong exercises.

Reports on the growing repression in China were summed up at the request of the petition committee by Milan Kajínek, editor-in-chief of the Czech edition of The Epoch Times.

“The repression has escalated and the Chinese regime has been carrying out arrests, imprisonment, and torture resulting in death,” Kajínek said.

Amnesty International stated that the Falun Gong spiritual movement was forbidden in China after its practitioners held a peaceful assembly in Beijing in April 1999.

“The Chinese government subsequently set up a special office, the 610 Office, to oversee the persecution of Falun Gong. … In 2017, Falun Gong practitioners continued to be persecuted, arbitrarily detained, exposed to unjust lawsuits, torture and other ill-treatment,” Amnesty International said.

The Czech Helsinki Committee’s chairwoman, Lucie Rybova, also took part in the hearings; the organization monitors compliance with the Universal Declaration of Human Rights. In connection with the hearing, the committee issued a statement that “calls for the termination of the persecution and the torture of Falun Gong practitioners and the adoption of a Senate resolution on the matter.”

Journalist and researcher Ethan Gutmann, an expert on China and the author of “Losing the New China” and “The Slaughter,” also spoke at the hearing. He has co-authored an investigative report on abusive organ-transplant practices in China.

“During the investigation that began in 2006, David Kilgour, David Matas, and I collected a set of evidence of approximately 1,200 pages,” Gutmann said. Using data from China and interviews with medical experts, Chinese policemen, and labor-camp refugees, the investigators have documented the massive development of organ harvesting from Falun Gong prisoners in China.

Hayen Wang, a representative of the NGO World Organization to Investigate the Persecution of Falun Gong (WOIPFG), also spoke. WOIPFG investigates the crimes of all institutions, organizations, and individuals involved in the repressive campaign of the Chinese regime against the spiritual movement of Falun Gong in China. Founded in January 2003, the New York-based organization has established a global monitoring system in 110 countries.

Deputy Minister of Foreign Affairs Lukáš Kaucký (ČSSD) summarized the activities of the Ministry, and said that both the European Union and its delegation in Beijing are exerting strong pressure on the Chinese regime in the area of human rights, with the EU’s stance “unambiguously hardening.”

The Czech Ministry of Foreign Affairs itself, according to Kaucky, has a “consistent policy” in the area of human rights, which includes calling for the “end of the persecution of persons on account of their religious beliefs, as well as ethnic minorities” and allowing the freedom of faith and other fundamental human rights and freedoms under the international declaration.

Members of Parliament from the Pirate Party were also present at the hearing. Olga Richterova, a vice-chairman of the Pirate Party, published an article on her blog after the Senate hearing, in which she responded to reports about current methods of the liquidation of dissidents that are taking place in China, by using modern transplantation techniques.

“It’s an alarming and years-long violation of all conceivable human rights, and a billion-dollar business,” she wrote.

Sen. Marek Hilšer said he would try to initiate an analysis of current Czech law on transplantation tourism to foreign countries, and plans to work to bring Czech law closer to the legal regulations adopted by Israel (2006) and Italy (2016).

“Not to believe that there is such a thing in China is to disbelieve our own experience with the communist totalitarian regime,” said Hilšer, in response to information about the persecution of Falun Gong in China. “Politicians should talk about these things.”

Former Minister of Culture Daniel Herman, who also supports an amendment to the Transplantation Tourism Act, said: “It is very important that this discussion takes place. Personally, I have known some Czech Falun Gong adherents for several years. I am deeply convinced of the benefits of Falun Gong for society.”

A bioethicist from Charles University, Jan Payne, is also interested in the transplant law.

According to Payne, there’s a need for a public discussion and to be acquainted with the results of the investigation; otherwise, it is difficult for a person to understand the allegations. He supports the adoption of the law on transplantation tourism and backs awareness-raising activities about the matter.

“I have personally met several former prisoners of conscience from China, and I have seen well-documented papers on this issue, as well as film documentaries, such as ‘Free China’ or ‘Hard to Believe,'” said former Czech Human Rights Commissioner Monika Šimůnková. “We need to talk about this issue and get it into the public space.

“I personally do not see any reason why the Chinese government suppresses a group that wants to physically and spiritually improve themselves as Falun Gong practitioners.”

Milan Kajinek
Milan is The Epoch Times reporter based in Prague, Czech Republic, focusing on news from Central and Eastern Europe.