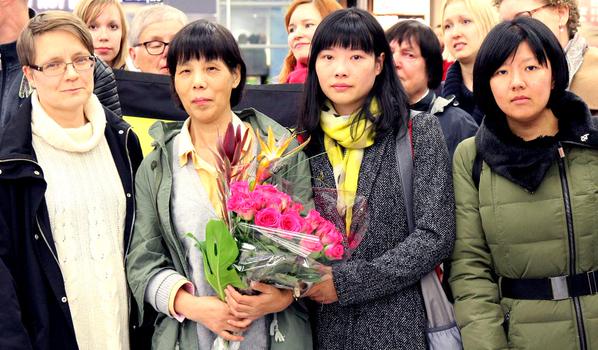 Chen Zhenping pictured with her daughter in Finland on Oct. 9. (NTD Television)
China

When it comes to human rights in China, there’s often doubt that the Party’s repression can be meaningfully allayed through nonviolent means—but a recent case from Taiwan offers some cause for hope.

Though long-detained and tortured by Chinese authorities for her beliefs, Chen Zhenping of Henan Province, central China, was freed this March through the intensive efforts of a Taiwanese branch of Amnesty International. The case has been a cause for celebration on the island, which lies adjacent China, and at her new home in Finland, where she has finally been reunited with her daughter.

The two, both of whom practice Falun Gong, were reunited on Oct. 9 after a seven-year separation.

The story of Chen’s journey to freedom began in December 2012, when the Amnesty International Taiwan Group 32 took interest in her case. In the three years that followed, members of the group applied constant pressure on Chen’s persecutors while appealing to the Finnish government and media, as well as to the Chinese authorities.

Su Ling, who currently convenes the human rights organization Amnesty International Taiwan Group 32, based in Taipei, had initially placed little hope in the efforts, calling it a “mission impossible.”

Chen had been abducted from her home in Zhengzhou, Henan, in 2008, according to a report by Minghui, a website run by Falun Gong practitioners that gathers information about the persecution.

The Xinxiang City Women’s Prison in Henan that held Chen also served as a garment factory, where she was tortured and forced to perform slave labor.

The chances of rescuing Chen seemed slim: Falun Gong, a Chinese meditative practice rooted in ancient Buddhist and Taoist traditions, is one of the most heavily persecuted groups in China. It has been targeted by the Communist Party since 1999, when then-leader Jiang Zemin declared Falun Gong a “heretical religion.” Tens of thousands are believed to have been murdered in the 16-year campaign.

But those responsible for Chen Zhenping’s abuse—officials in the Women’s Prison, Public Security, and the judiciary—received countless letters demanding her release and calling for an end to her abuse.

Often, the letters were addressed to individual wardens, prison heads, and guards, making the issue personal, and letting them know that there was no anonymity in their violence.

Interviewed by the New York-based New Tang Dynasty Television, Chen Zhenping described the torture that was specifically designed to coerce Falun Gong adherents to renounce and give up their faith.

As early as in 2003, Chen had been sentenced to three years’ imprisonment in Henan’s Shibalihe Women’s Labor Camp, where she suffered forced feeding and a specialized straitjacket meant to “transform” the Falun Gong adherents.

With their legs and arms bound behind their backs using strong ropes, women at the labor camp had been injured and in one case killed when tied up in the garment, which is designed to tighten when the wearer struggles.

One of Chen’s fellow inmates, Falun Gong practitioner Sun Shimei, died after spending a day in the straitjacket. The prison told the family that she died of a heart attack.

In addition to being tied up and hung from a window in the straightjacket, when Chen went on hunger strike in refusal to cooperate with efforts to “transform” her, labor camp staff force-fed her. After one particularly violent force-feeding event she went into shock and the hospital issued a notice that she was critically ill, and had her daughter take her home.

Eyes and Pens on the Regime

Chen Zhenping was arrested and sentenced a second time in July 2008 in anticipation of the Beijing Olympic Games, according to a 2009 Minghui report. Her daughter Jin Zhaoyu, who was by then living in Finland, brought the matter to international attention with the help of Amnesty International and Finnish media.

Members of Group 32 knew that the chances of their letters getting through to Chen were slim, but had faith that constant reminders of international attention would pressure prison authorities to treat Chen with more leniency.

“It’s the communist regime, there’s probably not going to be any positive result,” Su Ling told Epoch Times. “But we decided to give it a try nonetheless.”

Motivating Su was awareness of the severe persecution that faces millions of Falun Gong practitioners in mainland China—aside from imprisonment and torture, unyielding practitioners are shipped off to hospitals, where they are killed as fresh and profitable organ donors.

“It was very real and it indeed exists, it’s really heartbreaking,” Su said. “We have to let more people learn the fact that many mainlanders are persecuted for their religion and belief.”

“There definitely won’t be any effect if we do nothing, but if we take action something will come of it in the process,” Su said.

In September, after being freed from the women’s prison, Chen Zhenping escaped to Thailand with the help of friends, before making it to Finland.

“Today I am finally standing on free land, the beautiful Finland,” Chen said on Oct. 9. “I want to thank Amnesty International and the kindness of people who show their support to the persecuted Falun Gong practitioners who carry on in the belief of truthfulness, compassion, and tolerance.”