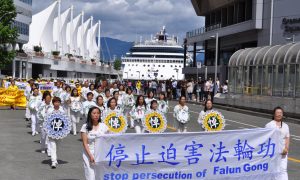 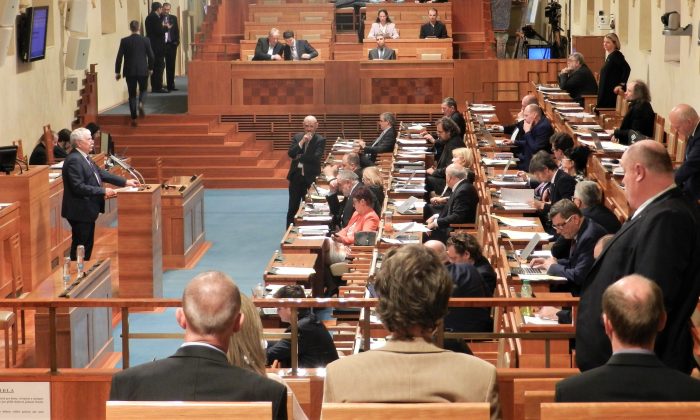 Senators hold discussions over a resolution expressing concerns over human rights abuses in China, at Wallenstein Palace, in Prague, the capital of the Czech Republic, on March 20, 2019. (Martin Samek/The Epoch Times)
Chinese Regime

The Czech Republic is the latest country to pass a resolution condemning gross human rights violations in China, drawing particular attention to the communist regime’s decades-long persecution of adherents of the spiritual discipline Falun Gong.

The resolution, passed by the Czech senate on March 20, marked the culmination of four years of efforts by local practitioners of Falun Gong, who had collected thousands of signatures on a petition calling for an end to the genocide committed by the regime against their Chinese counterparts.

The resolution calls on the Chinese regime to stop its persecution of Falun Gong practitioners, Christians, Tibetans, and Uyghurs; to release all prisoners of conscience; and to abide by international human rights conventions.

The petition, signed by the more than 37,000 people, was submitted to the Senate Committee on Education, Science, Culture, Human Rights and Petitions, which endorsed the petition and introduced a draft resolution to the senate for vote.

“Staying silent means we agree to it [the persecution],” Czech Sen. Marek Hilser, one of the chief architects of the resolution, said in Parliament on March 20.

Hilser added: “We, as a country, have experienced a communist totalitarian regime and know what political despotism is, having experienced political executions, incarcerations, and censorship.

“We know very well what human rights abuse and a lack of freedom are.

“That’s why I think our country, having had this historical experience, should be sensitive when human rights are being violated and values are being trampled on elsewhere in the world.”

Falun Gong, also known as Falun Dafa, is an spiritual discipline involving meditation exercises and a set of teachings based on the principles of truthfulness, compassion, and tolerance.

The discipline became immensely popular in China during the 1990s, with around 70 million to 100 million people practicing by the end of the decade, according to official estimates cited by Western media outlets at the time.

But in July 1999, fearing that its popularity would undermine the Party’s authority, then-Party leader Jiang Zemin launched a nationwide campaign against the practice, mobilizing the country’s entire security apparatus to locate, arrest, and detain Falun Gong adherents.

Human rights researchers estimate that hundreds of thousands have since been detained in jails, prisons, labor camps, and brainwashing centers, where they are often tortured physically and psychologically in an attempt to force them to give up their faith.

At the committee hearing on March 20, Czech Sen. Václav Hampl said: “I want very much to say thank you to all citizens for putting this petition into action and bringing this issue to the Senate. I think this is one of the many examples where cooperation between civic society and the Senate has been fruitful.”

Another senator, Václav Chaloupek, said, “Step by step, we have learned facts so horrific and terrifying that they are beyond what even our wildest imaginations could come up with.”

Veronika Sunova, the head of the Czech Falun Gong Association, said that the passing of the resolution marked a “unique step for the Czech Republick, bringing us back to where we belong, where our world views should be, and where our moral values are.”

In 2006, independent researchers uncovered evidence that the Chinese regime was harvesting organs from prisoners of conscience, and mostly targeting Falun Gong practitioners.

“The Chinese totalitarian regime really keeps hundreds of thousands of political prisoners in concentration camps. A person in there becomes just an organ carrier,” Czech Sen. Pavel Fischer said. “Organs are harvested from healthy, living persons to forward them on in the best quality possible.”

Hampl said, “Today, there is no doubt Falun Gong adherents and possibly other groups have been abused [for organ transplants] and on a mass scale.”

In 2016, an investigative report by Canadian human rights attorney David Matas, former Canadian Secretary of State for the Asia-Pacific region David Kilgour, and investigative journalist Ethan Gutmann concluded that the Chinese regime had established an “industrial-scale, state-directed organ transplantation system, controlled through national policies and funding.” Most of the organs, the report said, are harvested from Falun Gong practitioners.

“The Czech resolution sends that message to both perpetrators and bystanders: We know, we are concerned, we think something should be done,” Matas said in an email to the Czech-language edition of The Epoch Times.

Kilgour, also in an email to The Epoch Times, said that the resolution is “another helpful democratic initiative, which will hopefully this year bring to an end an ongoing crime against humanity across China.”

In 2013 and in 2016, the European Parliament passed resolutions expressing deep concerns over the “systematic, state-sanctioned organ harvesting from non-consenting prisoners of conscience,” including a large number of Falun Gong practitioners.

In 2016, U.S. House of Representatives unanimously passed H.Res.343, which also called for an end to the Chinese regime’s practice of organ harvesting. Several U.S. state legislatures have passed similar resolutions, including Arizona, Georgia, and Missouri.

Ondrej Horecky contributed to this report.