An Unprecedented Crime: State-Directed Mass Killing of Prisoners of Conscience in China for Their Organs 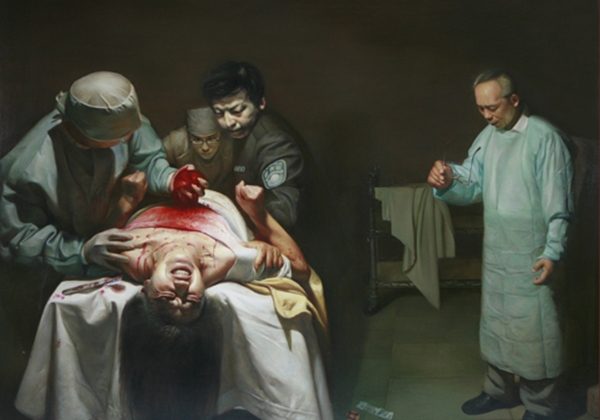 "Organ Crimes," an oil painting by Xiqiang Dong depicting the seizure of organs from a living Falun Dafa practitioner in China. (Courtesy of Xiqiang Dong)
By Omid Ghoreishi

A bill to curb international organ trafficking has received unanimous support from a parliamentary committee in Canada.

Parliamentarians on the Standing Committee on Foreign Affairs and International Development passed bill S-240 with amendments on Feb. 27. It will now go before MPs for final reading in the House of Commons.

It was 13 years ago, in 2006, that The Epoch Times first broke the news of systematic organ harvesting by Chinese authorities from Falun Gong prisoners of conscience. The report was based on witnesses who came forward and told harrowing accounts of doctors removing organs from victims while they were still breathing, and selling the body parts to fuel a lucrative state-sanctioned business.

“It is agonizing to recall the past. The organs removed from a living human being fetch a much higher price than from a dead body,” one of the witnesses, using the nickname “Annie” to protect her identify, said in a testimony. Her ex-husband, a neurosurgeon, was one of the doctors tasked with carrying out the heinous act.

“After the live organ removal, some Falun Gong practitioners were still alive and breathing, but some of their bodies were directly thrown into the crematory oven. No trace of their bodies is left,” Annie said.

The same year, the accounts of the witnesses were corroborated in an investigation done by former Canadian secretary of state and MP David Kilgour—who also worked as a prosecutor for many years—and David Matas, a Winnipeg-based human rights lawyer.

“Their vital organs, including kidneys, livers, corneas, and hearts, were seized involuntarily for sale at high prices, sometimes to foreigners who normally face long waits for voluntary donations of such organs in their home countries,” Kilgour said in a recent panel discussion, referring to a report he and Matas released in 2006.

Kilgour stressed that there is only one country in the world where the state is involved in forcibly removing organs from victims: China.

Joel Chipkar, a Toronto-based spokesperson for the Falun Gong Information Centre, says this abuse by the Chinese regime against adherents of Falun Gong—a spiritual meditation practice also known as Falun Dafa and based on the principles of truthfulness, compassion, and tolerance—is unprecedented.

“This is the first time in history that such atrocities have been alleged against anyone,” Chipkar said. “I think the closest comparison that we can correlate it to is what Hitler did—his experiments and atrocities against the Jewish community back in World War II.”

In 1999, the Chinese communist regime began a campaign of persecution against Falun Gong adherents that continues today, resulting in hundreds of thousands being imprisoned over the years. The researchers say China’s transplant industry grew rapidly after the launch of the campaign.

Speaking at a parliamentary hearing on the bill to fight organ harvesting, Liberal MP Borys Wrzesnewskyj said that since the Second World War, the world hasn’t seen such “human horrors on an industrial scale by a state, a government” as that in China.

“David Matas and David Kilgour really shone a light on perhaps the darkest of evils of our current times,” he said.

In 2016, Kilgour and Matas teamed up with U.S. investigative journalist Ethan Gutmann and released a new report, revealing that the scale of the illicit practice is much larger than originally thought. Their findings showed that each year, between 60,000 to 100,000 transplants take place in China, a country where organ donation is practically nil.

According to Matas, the fact that the regime has been able to continue with forced organ harvesting of Falun Gong adherents with impunity all these years has given it free rein to expand its violations—this time against China’s Uighur Muslim minority group.

“The Chinese communists could not help but notice the relatively free ride they got internationally from the persecution of Falun Gong, from the mass slaughter for their organs,” Matas wrote in a December 2018 report. “The communists launched into the present phase of repression of Uighurs with that free ride in their minds.”