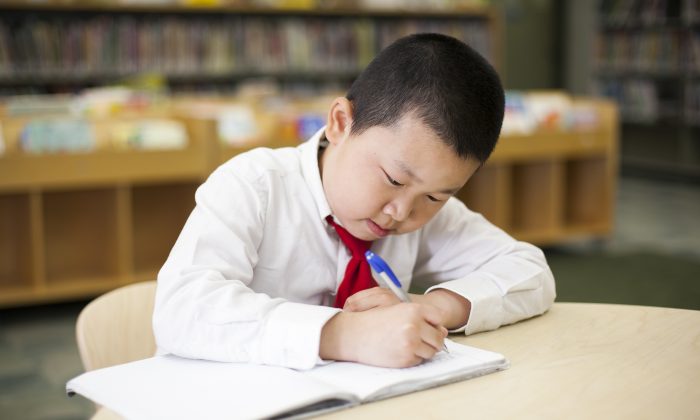 NEW YORK—The flashing red lights from Daniel Shi’s light-up sneakers faded as he sat down to write. His pen moved fluidly, from left to right, as he looped large cursive letters with an almost stoic concentration. His eyes were unblinking, his lips slightly parted. It was an impressive feat for any 9-year-old; let alone, a 9-year-old who struggles with fine motor skills and visual perception.

In April, Daniel, the son of Chinese immigrants, won the cursive category of Zaner-Bloser’s Nicholas Maxim Special Award for Excellent Penmanship—a national handwriting competition for special needs students. His teachers say since Daniel began writing his assignments in cursive this school year, his concentration and grades have improved immensely.

Daniel is a third-grader at The SEEALL Academy in Brooklyn, a school that is taking initiatives to preserve the tradition of cursive writing. The school’s decision to teach cursive is an interesting and disputed one; in 2010, 45 states and the District of Columbia subscribed to the Common Core—a national set of teaching standards that no longer require cursive in schools.

Individual states and districts can still decide whether to mandate cursive lessons in schools; Several states that adopted the Common Core Standards, such as Tennessee, North Carolina, and Florida, also took steps to require cursive teaching in their school systems. And it’s a decision that has been a point of contention among educators.

Those who are against cursive instruction argue the time it takes to learn cursive would be better spent on classes like math or science. Meanwhile, cursive advocates argue that the act of writing in cursive holds significant cognitive benefits—especially for children with disabilities. In Daniel’s case, perhaps the arguments are not mutually exclusive.

Daniel’s teacher, Maria Biagini, is a special education teacher with nine students in her class. Each student so far has responded differently to cursive writing. Daniel is an exception; having a powerful reaction to it.

“He would always scratch himself, and when he’s scratching he’s not paying attention,” she said. “When he’s writing in cursive he would sit there so beautifully.”

“He also has organizational issues,” she added. “And when he’s writing in cursive he takes pride in his neatness.”

Daniel’s mother, Xue Derong, said he spends hours every day practicing cursive handwriting at home. It has become a hobby. He looks forward to doing his homework because he writes in cursive, he even rewrites his homework.

“He writes with such energy,” said Xue said. “It’s good that he likes it. I use it to distract him from spending too much time on the computer.”

Daniel won $1,000 from the competition, which his parents said they will save for books. As they walked through the Brooklyn Public Library, Daniel’s head turned toward the computers. “There you go again with computers!” his mother scolded.

Why Cursive, Is It Too Complicated?

Writing in cursive enhances synchronicity between the left and right hemispheres of the brain, which is something that does not occur when printing or typing, wrote Suzanne Baruch Asherson, an occupational therapist, in a New York Times op-ed.

Also, students with learning disabilities, particularly dyslexia, have trouble differentiating letters like b and d—which look similar in print, but different in cursive. “This gives dyslexic students another option; an option that can decrease their dyslexic tendencies and make them more confident in their abilities,” according to an article in Parenting Squad, and online community of parents and experts.

“Cursive is very difficult to write accurately. It’s accident-prone,” she said. “It takes a lot of effort to master, and if it’s not written well it defeats the purpose.”

Why make students with learning disabilities write in a way that is accident-prone in terms of legibility? According to Gladstone, the argument that it improves fine motor skills is not enough.

Whether cursive is indeed the cause of the improvement of Daniel’s grades or not, it has brought confidence to Daniel and his family.

“This award feels like a dream,” his mother said. “Such a competition wouldn’t exist in China. The focus there is on rote learning. Here in the states, I’m glad he’s been able to discover his artistic talent.”

A recent national survey of 612 elementary school teachers suggests that cursive writing may be heading for extinction.

59 percent
Of teachers reported that they covered cursive writing instruction in their classrooms, while 67 percent of teachers said they plan to teach cursive in the future.

63 percent
Of teachers regarded cursive writing skills as either “important” or “very important.”

71 percent
Of teachers felt there would be long-term negative consequences associated with discontinuing cursive writing education.

82 percent
Of teachers stated that their schools do not implement keyboarding instruction in place of cursive writing instruction, suggesting that in general, less time is being spent educating students on the writing process.

Cursive: To Teach or Not to Teach

Learning to write in cursive is shown to improve brain development in the areas of thinking, language, and working memory.

Good for the Brain
Suzanne Baruch Asherson, an occupational therapist, wrote in an op-ed that cursive handwriting stimulates the brain synapses and synchronicity between the left and right hemispheres, something absent from printing and typing.

Access to Historical Documents
If you can’t write it you can’t read it, said Jimmy Bryant, the director of archives and special collections at the University of Central Arkansas, in an op-ed. “As an archivist, I see many beautiful letters that were written in cursive. However, many of those letters are at least 50 years old and the most beautifully handwritten letters are more than 100 years old. … We need to teach cursive to school children to preserve this history. Email messages are routinely deleted and not saved for posterity. Letters written in cursive tend to be saved and cherished.”

Signatures Required
American institutions still require signatures for things. One needs to both sign and print one’s name to receive a registered letter at the post office, as well signing one’s name to support a candidate for public office.

Reasons Not to Teach Cursive

Using cursive to improve fine motor skills is not necessarily effective, and cursive writing must be of high quality to communicate clearly.

Difficult to Do Well
Cursive is very difficult to write well. If any kind of handwriting is done poorly, it will not enhance fine motor skills.

Discouraging
Some people are not inclined toward cursive, and if cursive is mandatory, it could limit their potential.

Research Inconclusive
Cursive promoters misrepresent the research. A 2009 Indiana University study that is often quoted, actually examined the difference between kindergarten students learning in print versus keyboard, not cursive. Also, the purpose of writing in cursive is not to improve fine motor skills; if that is the goal, then activities such as knitting and playing musical instruments are more effective.