Trump Calls on Supreme Court to Rule in His Favor on DACA, Says Bipartisan Deal Could Be Reached
0
Share Now
TelegramFacebookTweetEmailTellMeWeReddit
Copy Link 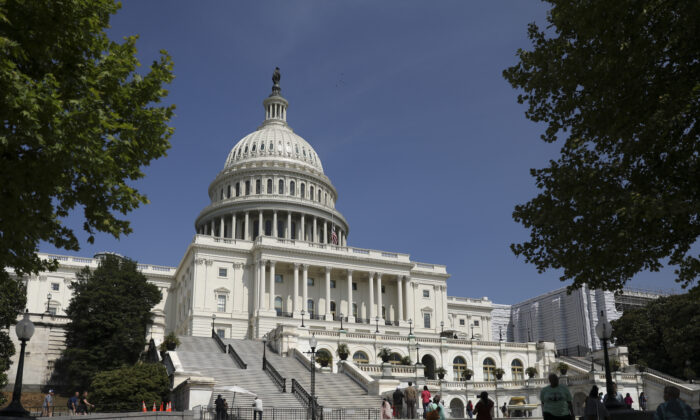 WASHINGTON—U.S. senators and representatives can manipulate their elected positions for their own benefit by taking advantage of multiple perks and privileges that constitute an entirely legal “pay-to-play” culture of corruption in Congress, according to a nonprofit government watchdog.

“Did you ever wonder why 97 percent of Congress gets re-elected each election year even though only 17 percent of the American people believe our representatives are doing a good job?” OpenTheBooks.com asks in the introduction to its report released Oct. 9.

A big reason why reelection is all-but-certain for virtually all members of Congress is the legal and regulatory culture that pervades Capitol Hill, as described by the report:

“Members of Congress own investment stock in, are employed by, and receive retirement pensions from federal contractors—to whom billions of taxpayer dollars flow.

“Our audit provides the details on how the game is played … with your tax dollars. We found the top donors to members giving hundreds of thousands of dollars in campaign cash and receiving millions—if not billions of dollars—in federal subsidies and contracts.”

The Chicago-based group campaigns to make government spending at all levels easily accessible for and accountable to taxpayers by posting it on the internet.

Six current and two former members of the House of Representatives are presented as case studies of how the pay-to-play system works, including four Democrats and four Republicans. The case studies are based on spending data from usaspending.com, campaign contribution data from the Federal Election Commission (FEC), and congressional disclosure forms.

The members profiled in the case studies include Democratic Reps. John Larsen of Connecticut, Jim Cooper of Tennessee, Debbie Dingell of Michigan, and Brenda Lawrence, also of Michigan.

The Republicans include Tom Cole of Oklahoma, Cathy McMorris-Rogers of Washington, former member Erik Paulsen of Minnesota, and Kristi Noem, the former representative from South Dakota, who is now that state’s governor.

Cooper’s top group of campaign donors are Vanderbilt executives and employees, who contributed more than $135,000 to his reelection campaigns between 2009 and 2018.

Cooper also owns an interest in the Cooper Brothers Land Co., which received more than $108,000 in federal agriculture subsidies between 2009 and 2015.

On the Republican side, Oklahoma’s Cole has been a member of the powerful House Appropriations Committee for a decade. The Chickasaw Nation of Native Americans, of which he’s an enrolled member, is headquartered in Cole’s district and employs approximately 10,000 individuals.

The Chickasaw Nation is one of the five “civilized tribes” re-settled from the Southeast region of the U.S. to Oklahoma in the 19th century, and it has long received substantial federal grants as a result of that status.

The nation received more than $700 million federal grants between 2014 and 2017, as well as $434,000 in surplus military equipment from the Department of Defense (DOD).

Chickasaw Nation employees and the organization itself have made nearly $200,000 in campaign contributions during Cole’s congressional tenure, making them his largest single group of donors.

Cole either sponsored or co-sponsored 23 bills on which the Chickasaw Nation lobbied since 2010, and its lobbyists contributed $58,500 to his campaigns.

The report also noted that Cole is a partner in a consulting firm that has been paid $224,000 by his campaign committee since 2002. Cole has received “roughly $320,000 in ‘management fees,” the report said.

“In four of the last nine election cycles (since 2002), Cole’s election opponent didn’t raise a single dollar. Yet, Cole raised $12 million in campaign cash,” according to the report.

Other examples from the eight case studies include:

“Congress wrote the rules, so oftentimes what is legal is not what is ethical,” OpenTheBooks.com President Adam Andrzejewski told The Epoch Times on Oct. 9.

“You can wash the outside of a cup and the inside still be filthy. It takes an empowered citizenry to stamp out the conflicts of interest.”

Andrzejewski added that “our report sheds new light on many ways members can leverage the nation’s wealth for their own political and personal gain.” Both major political parties bear responsibility, he said.

In addition to informed citizens pressuring their senators and representatives to stop such practices, Andrzejewski said the solution “doesn’t take a piece of legislation. Members should reject accepting campaign donations from federal contractors and their affiliates. That removes the conflict of interest.”