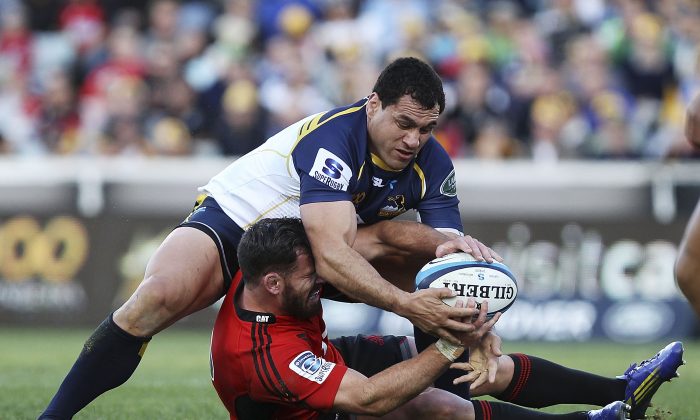 Brumbies flanker George Smith (top) tackled Crusader Ryan Crotty, released him and regained his feet according to the rules, then effected the turn-over pictured here ... all before anyone else arrived. (Stefan Postles/Getty Images)
International

International star Dan Carter returned from injury for the Crusaders—and threw a pass that was intercepted by opposing flyhalf Matt Toomua, who raced 70 metres to score.

That 7th minute try put the table-topping Brumbies 10-nil up at home in Canberra.

Only minutes earlier, star flanker George Smith led the Brumbies onto the field, as an honour for playing a record 137 games for the Brumbies, breaking the record held by George Gregan.

Smith said Gregan had been a mentor and a role model, and he thought the former Australian captain would be pleased that Smith had achieved the milestone.

Adding to this fortune, the great Carter continued to play without rhythm. A loss would mean the end of the Crusaders’ 2013 Super Rugby campaign, so the pressure was intense.

As they have done season after season, the Crusaders turned pressure into composure and slowly took control of the game.

Half-back Andy Ellis darted over for a try, after the Crusaders had pounded the Brumbies with sustained forward pressure.

Then Carter re-found his form and the Crusaders dominated to win 30-23.

But the disciplined Brumbies played without their usual intensity.

The Crusaders are now placed third in the New Zealand conference, behind the Chiefs and the Blues, who both won.

In Auckland, the Blues beat the Stormers 18-17, in a break-neck encounter. The side has transformed, after last year’s poor performance.

New coach John Kirwin, a former All Black star, said he was impressed by the growing maturity of his players, who tempered their adventurous style as a tactic against the defensively strong Stormers.

Ahead 15-3 in the second half, the game belonged to the Blues. But Stormers captain Jean De Villiers scored two tries to reduce the gap to one point.

Even when the full-time siren sounded, the Stormers were not beaten. For a further three minutes they pounded the Blues defence, trying to force the penalty that would bring victory. Eventually, the ball was sent back to Elton Jantjies, who missed the field goal.

The unlucky Stormers play the Waratahs in Sydney on Saturday. The Waratahs continued their erratic form, beating the Kings 72-10. It will be a fundamental test for the Waratahs.

In Pretoria, the Bulls gave the Hurricanes a lesson in rugby basics, scoring six tries in their 48-14 victory.

Proving once again that it “all begins up front”, the Bulls forwards laid the platform for the resolute victory.

Bulls captain Pierre Spies praised his whole pack, saying: “you could see the intent” from the first scrum.

Again, discipline and strategy were the keys.

Coach Frans Ludke said the aim was to restrict the attacking Hurricanes backs. The Bulls dominating defence meant most of the Hurricanes ball was on “the backfoot”, which limited their time and space.

Meanwhile, the Reds could have topped the table, but could only manage an 11-all draw against the Force from Western Australia, who have improved this year, against expectations.

Turning to the June tour of Australia by the Lions, the Wallaby bad boys, the Three Amigos, Quade Cooper, Kurtley Beale and James O’Connor are all staking their claims.

Beale returned from suspension—after punching his Melbourne Rebels captain—and showed his class. Team-mate O’Connor is playing well. And leading the pack, Quade Cooper has added maturity to his brilliance.

Just last season, Cooper was despised by many Australian fans, after he publicly complained that the atmosphere in the Wallaby camp was “toxic” and he had little desire to play in the “yellow” jersey.

Wallaby fans, who love the green-and-gold, took the word yellow to be a slur.

The hard-line opposition to Cooper has mellowed, but controversy remains around all three selections.