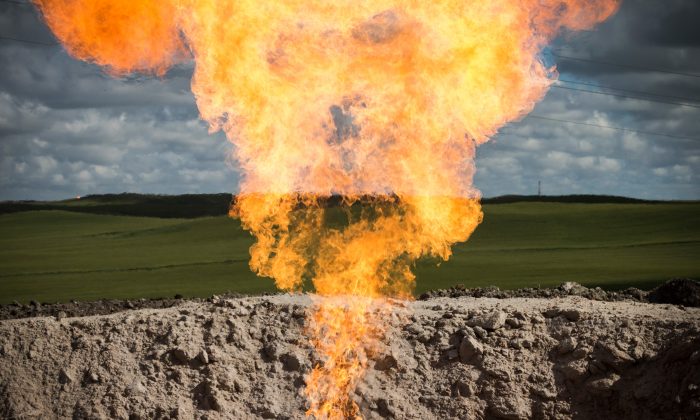 A gas flare is seen at an oil well site on July 26, 2013 outside Williston, North Dakota. (Andrew Burton/Getty Images)
News

Consumers would like the price of oil to drop to $20 per barrel and see gas $1 per gallon again. However, oil is not going to drop down to $20 and even a sustained decline to $75 would have far-reaching economic and geopolitical ramifications.

Most prices for oil have been down 20 percent over the last 12 months with Brent crude currently trading at $78. This is a dangerous level, not only for Russia, but also for U.S. shale oil producers.

It is widely believed the United States pushed Saudi Arabia into flooding the market with cheap oil in order to wage economic war against Russia in the wake of the Ukraine crisis. Saudi Arabia also has a bone to pick with Russia for siding with Syria, so the sheiks gladly complied.

They can afford to do this for a while because the Saudis have monetary reserves of $447 billion and could sustain a budget deficit for nearly eight years at a price of $83, according to Deutsche Bank estimates. Big oil producers depend on the direct revenue or taxes from crude production for government financing.

Russia, on the other hand, has monetary reserves of only $173 billion and could sustain a deficit for only four years. Of course, this estimate is merely theoretical, as neither country would like to exhaust its piggy bank.

In addition, a budget deficit is not what would hurt Russia. Lower oil prices hurt Russian companies and make foreigners sell their stocks and go out of the ruble, down 40 percent against the U.S. dollar. This poses a whole different set of problems for Russia and is not something that Saudi Arabia is concerned about.

Saudi Arabia would also not be too concerned if U.S. shale oil producers went bankrupt. If it is true that United States policymakers pushed the Saudis to lower the oil price in order to punish Russia, they might be shooting themselves in the foot.

The United States now produces as much oil (including synthetics) as the Saudis, roughly 11 million barrels per day. However, the break-even price for most shale oil is around $80 and many of these companies are heavily in debt, unlike their Saudi counterparts.

Deutsche Bank estimates a third of the more indebted U.S. energy plays—predominantly shale—could go bankrupt at an oil price of $60. Even if this extreme scenario doesn’t happen, Goldman Sachs estimates millions of barrels of lost production for each dollar decline in price around the sensitive $80 region.

So while a lower oil price is good in the short term—gas prices have declined 10 percent this year—in the long term it would mean wiping out future production, causing higher prices.

While the United States has its work cut out figuring which short-term and long-term objectives to prioritize, the Chinese are stocking up.

October saw a record 89 oil tankers heading for China, part of a 21 million barrel order. Because China’s slowing economy is in part to blame for the collapse in prices, this shipment will probably expand China’s strategic petroleum reserve at bargain prices.

In Europe, people can rejoice at a lower oil price they cannot match, at least not as much. While oil prices in dollars decreased 20 percent over the past year, the euro is also down 8 percent against the dollar, giving the eurozone a net price reduction of 12 percent.

In addition, sanctions, lower oil prices, and a lower ruble have pushed Europe into a closer alliance with Russia, which will hurt European energy supplies in the long term.

The economic theory of supply and demand as well as price discovery is supposed to give agents a better understanding and guide their future behavior. Alas, when it comes to the most important strategic commodity in the world, things aren’t quite as simple.