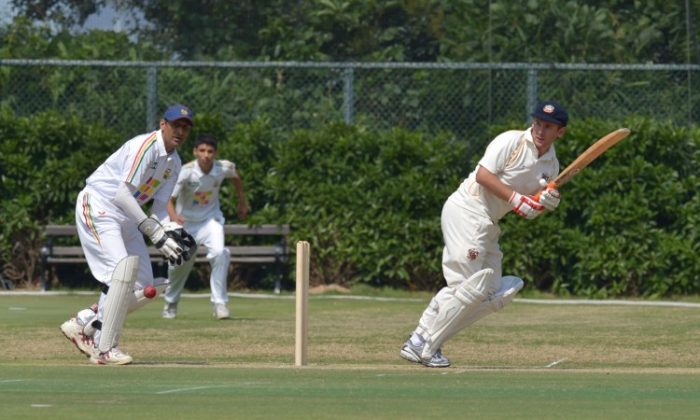 Stylish left-hand opening batsman, C.L. Bright for HKCC Scorpions, turns the ball to leg during his innings of 42 runs, contributing to his side’s 218 total in their 50 overs at the HKCC ground against LSW JKN on Sunday Oct 21. LSW won by five wickets with more than 10 overs to spare. (Bill Cox/The Epoch Times)
News

Little Sai Wan JKN won with the bat, while Pakistan Association AMSUA did it with the ball at the cricket in Hong Kong last weekend.

In an excellent display with the bat, Little Sai Wan (LSW) Cricket Club scored the required runs with five wickets and more than 10 overs in hand; conversely, Pakistan Association comfortably dismissed their opponents to win by over 50 runs in Hong Kong Cricket Associations KARP Group Sunday Champions League on Oct 21.

On a lovely autumn day, Hong Kong Cricket Club (HKCC) Scorpions hosted LSW JKN at the HK Cricket Club ground. Scorpions won the toss and decided to bat. The opening pair put on 54 for the first wicket off 14 overs. Opening batsman, C.A. Bright, went on to make a useful 42 runs, but was out when the score was 101 for four wickets. Scorpions’ number six, V.C. Creagh, then took the lead making a fine unbeaten half century and taking the score to 218 for nine wickets off their 50 overs. Scoring was a bit slow in the early part of the innings, but one might have thought the total was a reasonable target to set.

In reply, LSW batted superbly despite the fall of cheap early wickets in N. Hameed (for 5) and S. Pandey (duck). After the dismissal of Khan when the score was 67, TH Dar combined with A. Singh to add a further 35 runs. Dar scored 51 before being caught by MD Ferguson off the bowling of J. Subramanyan with the score on 102 for four wickets. Singh then picked up the challenge, scoring an unbeaten 74. He combined well with M.M. Ahmed (33) and S. Hag (18 not out), to polish off the 219 runs needed to win the match in 38.3 overs.

In the match at Mission Road against the combined team of United Services Recreation Club and Millennium Cricket Club (USRC-Millennium), Pakistan Association AMSUA won the toss and decided to bat. They scored a total of 141 all out off 43.1 overs. M. Hussain was highest scorer with 38 runs. G.E. Holder took 3 for 27, J.F. Khan 3 for 36 and A. Khan 2 wickets for 16 runs.

In response, USRC-Millennium could only muster 82 runs and were all out in 34 overs. Wickets were shared amongst all of the seven bowlers. Chalk up four points to Pakistan Association and none to USRC-Millennium.

After Round 6 of the Championship, Shaffi’s Vagabonds still lead the table with 9-points off two (2) games; three teams are on 5 points in second: LSW Knights (1), KCC Templars (1) and USRC-Millennium (2); meanwhile, with their first wins of the season, LSW JKN (1) and Pakistan Association (1) move up to joint fifth place, with HKCC Wanderers on 4 points.

The KARP Group Hong Kong Cricket Sixes takes place next Saturday and Sunday Oct 27 and 28. There are no Sunday Championship League matches until Nov 4 when there will be four matches to be played instead of two.