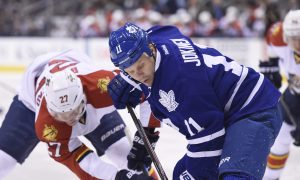 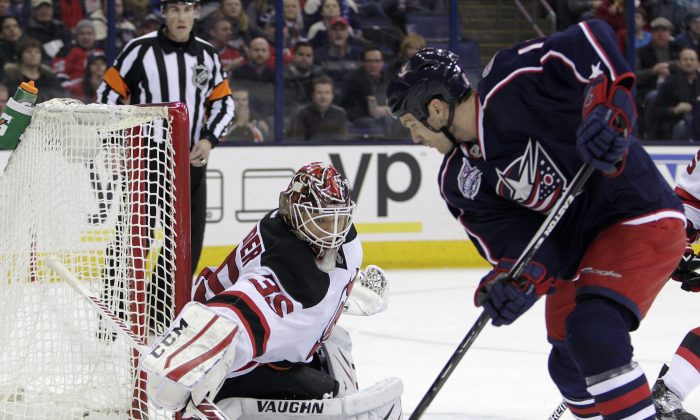 The Toronto Maple Leafs gave David Clarkson a chance to revive his career in Columbus in the days leading up to the NHL trade deadline. (AP Photo/Jay LaPrete)
Canadian Content

Though 2015’s NHL trade deadline day did not showcase the blockbuster deals of previous years, general managers were the stars showing sides of themselves not typically seen in the salary cap era.

As in past years, the blockbuster deals were made before the deadline day. But the David Clarkson for Nathan Horton trade on Feb. 26 was the biggest shocker for more than just the players and teams involved.

For all the warnings that this might be a quiet deadline day, given the good chance that the NHL’s salary cap is likely to stay around US$69 million next season, this trade showed the imagination and creativity that general managers can display when their backs are up against a wall.

Clarkson’s contract was seemingly unmovable until the Blue Jackets came knocking with an offer to take Horton off their hands, a player with little chance of ever recovering from a back injury and one that will not affect the Leafs’ cap. Some might call the deal “cap circumvention” since the Leafs willingly take a player they know won’t be able to play while paying out his remaining $26 million contract—an act very few NHL clubs can afford.

Though the Jackets reportedly approached the Leafs with the deal, Leafs GM Dave Nonis received largely positive reviews and may have taken a step towards keeping his job over the summer. It’s along way until the next collective bargaining agreement is negotiated, but look for other precedents in this area and for a reaction to this kind of deal-making from the league.

While many teams cannot afford a large payout like Horton’s, the prices for trades and rental players was nevertheless high.

The New York Rangers went all-in for their Stanley Cup drive by acquiring scoring defenceman Keith Yandle from the Arizona Coyotes for John Moore, Anthony Duclair, a 2015 second round pick, and a conditional first round pick in 2016.

Duclair, especially, is a steep price, having played on this year’s Canadian World Junior gold medal-winning team. He joins fellow Canadian prospect Max Domi in a Coyotes organization that can call the deal a win for their future—wherever that might be. The Rangers, meanwhile, are buyers and want to make it back to the Cup final and redeem their loss to the Los Angeles Kings in 2014.

The biggest winners of the day may have been “losers” as the Buffalo Sabres and Coyotes rid their rosters of valuable assets in favor of a better chance at drafting a franchise player in the June entry draft. The Sabres traded Michal Neuvirth for the lesser Chad Johnson from the New York Islanders and Chris Stewart to the Minnesota Wild, while the Coyotes shipped Antoine Vermette and Zbynek Michalek to the Chicago Blackhawks and St. Louis Blues respectively.

The transparency and frequency with which teams have made these deals further exemplifies that there is little incentive for non-playoff teams to win once they’re out of the playoff picture. Even the club that finishes in last place has just a 20 percent chance of landing the first overall pick. Despite this, the Sabres and Coyotes have sold hope to their fans when winning is not an option.

Welcome, less cynical surprises were the personal details behind the men who were exchanged in the past few days. Vermette found out about his move to Chicago minutes before he boarded a plane back to Arizona with his Coyotes teammates.

Those last hours must have been strange for a player to go through, though perhaps not as strange as Curtis Glencross who drove three hours to Toronto after finding out he was dealt to the Washington Capitals. He arrived during the second period and watched as his new team beat up on the Leafs 4–0. It also happened to be his wife’s birthday and the couple is expecting their third child in a month.

The effects trades have on families was no more apparent than when Jordan Leopold was sent to Minnesota, his hometown, from Columbus. Earlier last month, Leopold’s daughter Jordyn wrote a letter to the Blue Jackets asking that her father “please, please, please” be sent home to the Wild. Not only did she get her wish, but Blue Jackets GM Jarmo Kekalainen tweeted out the Leopold letter for all to see. When an executive so openly acknowledges the personal side of the game, one knows it’s been an unusual deadline day and it’s not always just business.

The week leading up to and including trade deadline day put on centre stage some of the topics that may get the league and the players talking, namely trading players on long-term injured reserve and the issue of “tanking” for draft picks.

If fans and players thought it might be a quiet trade period due to a plateauing salary cap, they learned not to ever underestimate the creativity and the humanity of NHL executives.

Joe Pack is a freelance writer based in Toronto covering sports and culture. Find him on Twitter @JoePack