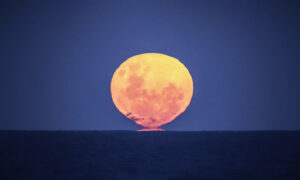 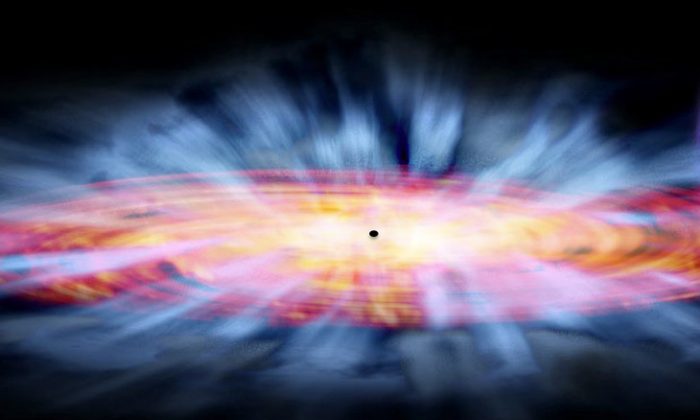 Above, artist's impression of a high-velocity wind (white) being launched from the surface of an accretion disk (red/yellow) around a supermassive black hole (black central dot). To set the scale, the black hole's size in this image is comparable to that of the inner solar system. (NASA/CXC and Nahks Tr'Ehnl)
Science

The fastest winds ever seen at ultraviolet wavelengths have been discovered near a supermassive black hole.

“This new ultrafast wind surprised us when it appeared at ultraviolet wavelengths, indicating it is racing away from the ravenous black hole at unprecedented speeds—almost like a bat out of hell,” says William Nielsen (Niel) Brandt, professor of astronomy and astrophysics and a professor of physics at Penn State.

“We’re talking wind speeds of more than 200 million miles an hour, equivalent to a category 77 hurricane,” says Jesse Rogerson, who led the research as part of his efforts toward earning a PhD in the physics and astronomy department at York University in Canada.

The ultraviolet-wavelength winds are coming from the black hole’s quasar—the disk of hot gas that surrounds the black hole. Quasars form around supermassive black holes at the centers of massive galaxies. Quasars are bigger than Earth’s orbit around the Sun and hotter than the surface of the Sun, generating enough light to be seen across the observable universe.

“An exciting discovery in recent years has been the realization that ultraviolet winds from quasars can both appear and disappear when viewed from Earth, depending on various conditions surrounding the black hole,” Brandt says.

“Black holes can have a mass that is billions of times larger than the Sun, mostly because they are messy eaters in a way, capturing any material that ventures too close,” says Patrick Hall, associate professor at York University. “But as matter spirals toward a black hole, some of it is blown away by the heat and light of the quasar. These are the winds that we are detecting.”

The researchers used data from the Sloan Digital Sky Survey (SDSS) to identify new outflows from quasars. After spotting about 300 examples, they selected about 100 for further exploration, collecting data with the Gemini Observatory’s twin telescopes in Hawaii and Chile.

Much of the research is aimed at better understanding outflows from quasars and why they happen. “Quasar winds play an important role in galaxy formation,” Rogerson says.

“When galaxies form, these winds fling material outwards and deter the creation of stars. If such winds didn’t exist or were less powerful, we would see far more stars in big galaxies than we actually do. Hubble Space Telescope images of galaxies would look much different if quasar winds did not exist.”

The study is published in the Monthly Notices of the Royal Astronomical Society.