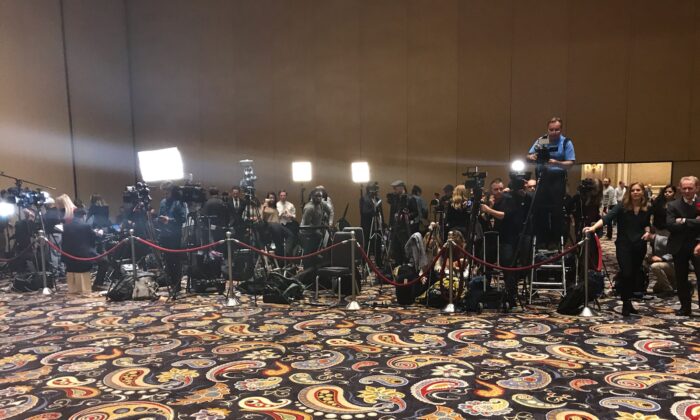 Crap Shoot: Caucusing at the Bellagio

It bordered on the surreal. In fact it crossed over. At Las Vegas’ upscale Hotel Bellagio, employees and others were set to caucus away Saturday, largely—it was expected—in favor of socialist Bernie Sanders, not more than fifty yards from the hotel’s casino where a minimum bet at the craps table is $100 and goes up from there in multiples that might make even Mike Bloomberg hesitate.

Nevertheless, it gives you a true sense of what old Bern’ means by “income inequality,” even if his method of ending it leaves a lot to be desired.

Meanwhile, that craps analogy weirdly applies to all the roughly 250 caucuses taking place across Nevada because the system really is a “crap shoot” in the true sense of that hoary phrase, mixed in with a little poker. Call it “jacks to open, trips to win.”

Don’t believe me? If it’s a tie between two candidates at one of the precincts, a mint deck of cards is unwrapped (just like at the 21 table), cut a minimum of seven times and then drawn by representatives of the candidates. Aces are high, in case you’re interested, and, in the event of a tie, spades win, clubs lose.

Does this sound like democracy? Not to me. But at least the Nevadans, unlike the Iowans, have early voting, assuming the iPads work (but on latest report they’re not being used anymore).

It was sort of a “secret-ish” ballot for the early voters who were asked to rank the candidates from one to five on an aforementioned iPad. This was not, mind you, for Best Strip Billboard, which goes hands down to that other billionaire Tom Steyer who greets you as you drive into town with a flasher outdoing such standbys as Mariah Carey or the Blue Man Group.

No, this was about the presidency and if your early ballot was for a candidate who ultimately does not receive the requisite 15 percent at his or her site, then your number two vote counts and so on. Follow this? If not, don’t play craps.

If you’re beginning to detect I’m a bit cynical about the caucus system in general, maybe you should play craps—but remember, nobody wins in the long run. But it is the caucus system that is on trial here in Nevada after having failed miserably in Iowa.

A woman I spoke with representing the Culinary Workers—the key union hereabouts that has famously demurred from choosing a candidate because they differ from Bernie, whom they would normally adore, on healthcare—disagreed. A caucus veteran, she sees these events as an opportunity for people to express themselves, like at the “kitchen table,” she said. I just listened.

The Bellagio being, well, The Bellagio, it is clearly by far the favorite venue for the press to cover the caucuses in general. Not surprisingly, typing a half hour before the start, there are more reporters than caucus goers, even though there are plenty of employees at this very large hotel who have been given time off to vote.

Dozens of press people are here, TV cameras everywhere. Drive to one of the many precincts even an hour out of Vegas and I doubt you’d see any press.

Democratic Party chair Tom Perez has even arrived here before the caucus and was immediately surrounded by the press gaggle. It’s surprising he would show his face, given the incoming he took after the Iowa debacle that included demands for his resignation. If Nevada turns into another nightmare, he might not be able to resist them. We’ll know tonight.

Update: Bellagio goes huge for Bernie. Shouts literally ring out, drowning out everyone. Delegate count from this precinct: Sanders, 32; Biden, 19; others, zip.