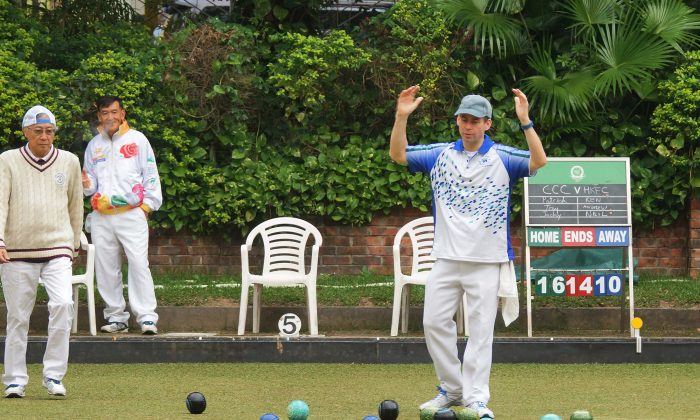 Hong Kong Football Club’s Neil Herrington (middle) shows his frustration during the Triples League match against Craigengower Cricket Club-A on Saturday Jan 9, 2016. Despite Herrington losing his match, the team return with a 4-4 draw and remain fifth on the table. (Mike Worth)
HK Lawn Bowls

HONG KONG—After a short break during the festive season, Craigengower Cricket Club continue their strong push for their first ever Triples League Division 1 title after taking maximum points in their first five games.

CCC, whose best results since the competition was inaugurated in 2007 was as runners-up back in 2012. The club now has two teams in Division 1 with the B team comprised of a number of elite players recruited in recent years, including debutant Stanley Lai who just joined from 2013 champion Kowloon Bowling Green Club. He joined 2015 Classic Singles champion Jordi Lo, 2012 and 2014 bowler of the year Wong Chun Yat, top Hong Kong youngster Lee Ka Ho to form a star-stuffed team to challenge for honours.

During the New Year break the team played a rescheduled game against the 2013 Champion Kowloon Cricket Club on home soil and the results shown that they are the real contender this time. CCC won the game 8-0 with absolute dominance throughout.

After the wins CCC currently have the maximum of 40 points from five games, followed by KCC’s 26 points. With less than half of the games remaining a big gap has been opened between the leader and the rest, the title could be settled in the next two weeks.

While CCC’s toughest games against the Police, last year’s champion, and Kowloon Bowling Green Club, the Premier League champion, was set for the last two games of the season, the CCC team may not need those points by then.

If CCC continue their current form, they will become the first team to win the competition with a 100% record.

LBTC dropped to the bottom after the lost to CCC. They now have eight points, two less than second-from-bottom Club de Recreio.

Another team who also maintained their 100% record is the Youth Team in Division 3. They have won all their four games 8-0 and are now top of the table, leading second-placed China Light and Power by 10 points.

In the women’s competition, Hong Kong Football Club moved back to the top after consecutive victories at home against the Police and Seabird Sports Club. Their course was also helped by KBGC, who took three points from second-placed Shatin at Sports Association’s Siu Lek Yuen green.

HKFC now have 33 points, one more than Shatin. At the bottom is Seabird with only six points after four games.