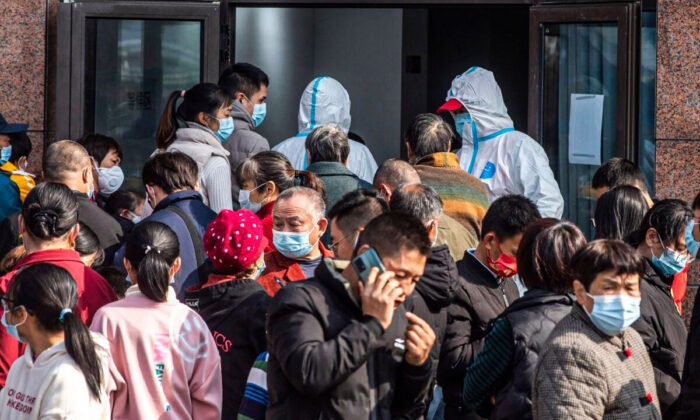 People wait to undergo nucleic acid tests for the COVID-19 coronavirus during a mass testing in Ningbo, in eastern China's Zhejiang province on Dec. 7, 2021. (STR/AFP via Getty Images)
INSIDE CHINA

COVID-19 Spreading in East China, Tens of Thousands in Quarantine

Since the lockdown of Xi’an, the northwest city of 13 million people, COVID-19 outbreak has quickly spread to East China, putting tens of thousands in quarantine, and affecting a major production base for Adidas, Nike, and Uniqlo.

At a Jan. 3 press conference, Ningbo City of Zhejiang Province reported that since Jan. 1, a total of 23 confirmed cases have been reported in Beilun District, with cases concentrated to three garment factories of Shenzhou International Group Holding Co., Ltd. (Shenzhou International). The group’s factories are original entrusted manufacturers (OEMs) for well-known domestic and foreign brands.

Since the Chinese communist regime has consistently concealed the extent of the pandemic in China, the outside world generally does not believe that the official COVID-19 data reveals the true numbers on the ground.

On the same day, Shenzhou International issued an announcement stating that an epidemic has occurred in the area where the group’s Ningbo production base is located, with some employees infected. The local government has imposed a lockdown on part of the group’s production area in Beilun District.

The Epoch Times has obtained a video showing a long line for COVID-19 testing in Beilun.

A female employee of Shenzhou International told the Chinese edition of The Epoch Times on Jan. 4, “Tens of thousands of people of the entire Shenzhou International in Beilun have been put in quarantine. Those who are not infected stay at home and in dormitories for quarantine. A few [thousand] people in one dormitory have been taken away for isolation because someone in the dormitory was infected.”

A male resident living near the garment factory of Shenzhou International told The Epoch Times that the area around the factory can only be entered but no one can leave. Starting Jan. 2, even before the lockdown was officially announced, all the businesses and shops in the area around the factory were forced to shut down, and residents were not allowed to leave their houses.

“The factory workers have been to some nearby [diners] to have breakfast, and the workers have also been to other shops. This time, Ningbo is in danger.

“People have been told to quarantine at home for at least 20 days,” he said. “Some have been tested the fourth time for COVID nucleic acid test. This factory has too many people.”

The Epoch Times reached out to Shenzhou International for comment but is yet to receive a response.

According to a report by China Business News on Jan. 3, Shenzhou International is a full-chain textile and garment enterprise integrating spinning, weaving, dyeing, garment making, embroidery, auxiliary materials, stitching, and other processes. It is the largest knitted garment export enterprise in China and a giant in apparel OEMs.

Shenzhou International’s customers include internationally famous brands such as Uniqlo, Nike, Adidas, Puma, FILA. Its products export to more than 30 countries and regions, such as Japan, Europe, America, and Southeast Asia.

Hong Ning and Liu Yi contributed to the report.