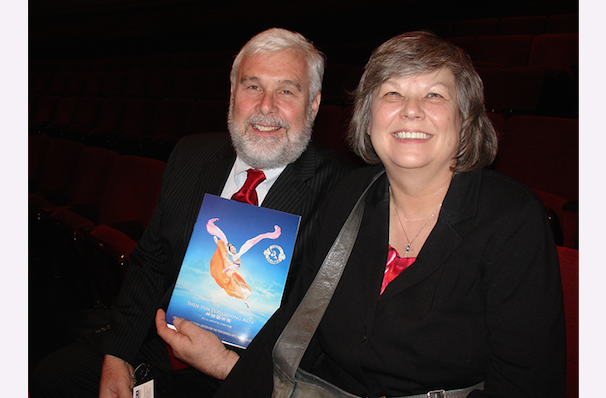 LOUISVILLE, Ky.—Wayne and Elizabeth Maeser enjoyed the spiritual messages in the performance by Shen Yun Performing Arts very much. The couple saw this world premier classical music and dance company at the Kentucky Center’s Whitney Hall, on March 23.

The Maesers understood that the deepest purpose of Shen Yun is to revive the divinely inspired Chinese culture.

Mr. Maeser who helps maintain machines at Indratech of Kentucky, noted the Lord Fa, or Lord of the Law, as an aspect that touched him the most. “The great way of living that everyone, every culture has—someone to look to,” he said.

Dr. Elizabeth Maeser, a pediatrician at Kosair Children’ Hospital, chimed in with “the Creator.”

“The Creator, yes. … that gives them worth, something to live for,” Mr. Maeser continued.

“And working our way towards the heavens again,” Dr. Maeser chimed in again.

“I loved it. It was great,” she said of the whole performance. “It was educational and fun.”

“And it’s nice how the dance is so colorful, yet so quiet and peaceful,” she continued. “It’s an interesting combination, the moves that they make, the way they walk very quietly. Very peaceful and very beautiful at the same time.”

“I believe in freedom of religion and I wish China had it, yes, yes,” Dr. Maeser agreed.

Mr. Maeser would recommend the performance to his friends, saying, “It is very much worth it. It is very enjoyable and they would be very happy after seeing this show.”