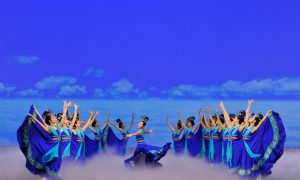 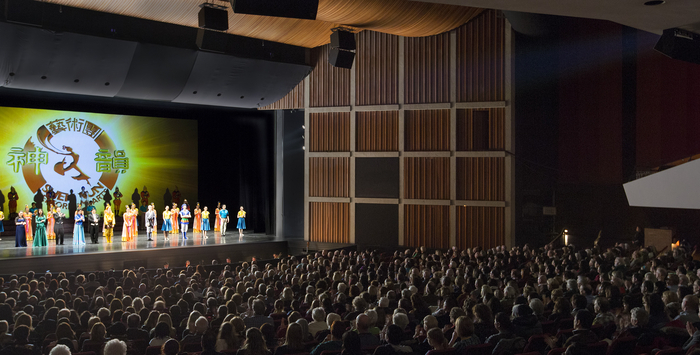 The cast of Shen Yun Performing Arts bids farewell to the audience at Hamilton Place Theatre at the end of its performance on Jan. 12, 2014, upon the completion of a successful two-day, three-show run in the Southern Ontario city. (Epoch Times)
Arts & Culture

Anticipation is in the air as Canada gets set to welcome the return of Shen Yun Performing Arts, slated to begin the Canadian leg of its annual tour at the end of the month.

Its first stop will be Hamilton, with two performances on Dec. 27 and 28, followed by 28 more shows in seven other cities in Ontario, Quebec, and B.C. throughout January.

The world’s premier classical Chinese dance and music company, New York-based Shen Yun is a global phenomenon that tours the globe with an all-new production every year.

The performance has attracted praise from theatregoers hailing from many different worlds—from performing and visual arts and fashion, to academia, business, and government—who come away with a warm appreciation for the rich traditional Chinese culture and art forms displayed in Shen Yun.

Each year the company is welcomed back to Canada with greetings and best wishes from noted leaders from all levels of government, and this year is no exception.

“For thousands of years, classical Chinese culture has inspired the world with music and dance of remarkable beauty,” wrote Gov. Gen. David Johnston in a greetings letter.

“The Shen Yun Performing Arts show is a wonderful showcase of the richness of this culture, which adds so much to the fabric of our country.”

“I am sure that this beautiful production will be enjoyed by everyone in attendance,” said Prime Minister Stephen Harper, adding that the event is “an exquisite presentation of classical dance and music inspired by 5,000 years of traditional Chinese culture.”

Shen Yun’s mission is to revive China’s ancient divinely inspired culture, which has largely been destroyed due to the Cultural Revolution and following decades of suppression by the Chinese communist regime.

“The Shen Yun Performing Arts preserves and promotes the cultural tradition while highlighting the diversity of the … Canadian host cities,” noted Jason Kenney, Minister of Employment and Social Development and Minster for Multiculturalism.

“The Shen Yun performance is a testament to the impressive development of the Chinese-Canadian community over the past several years,” wrote Chris Alexander, Canada’s Citizenship and Immigration Minister.

Minister of Health Rona Ambrose noted that “Shen Yun performances showcase the beauty of classical Chinese dance and music, and highlight the exceptional artists who provide inspiration with the rigorous talent and graceful elegance.”

Minister of Labour and Minister of Status of Women Dr. Kellie Leitch, along with Liberal Leader Justin Trudeau, was among other government dignitaries who commended the Falun Dafa Association for hosting the shows in Canada and providing a chance for all Canadians to celebrate Chinese heritage and achievements.

“It is essential to have events such as the Shen Yun show; events which allow Chinese-Canadians to connect with their roots and share their rich history with all Canadians,” Trudeau wrote.

‘The best I have ever seen’

Leaders in the entertainment industry have also praised Shen Yun for its ability to captivate as well as educate.

Academy Award-winning director Robert Zemeckis, who watched Shen Yun in Santa Barbara, Calif., in March, said he was moved by the performance.

“I think it’s exciting and moving. Moving in a compelling way; it makes you want to watch,” said the “Forrest Gump” and “Back to the Future” director.

Miss World Canada chairman Ike Lalji attended the performance in Vancouver in January this year and said it was unrivalled.

“We have shows, we have all kinds of talent, but what I saw tonight was the best I have ever seen,” he said.

Classical Chinese dance, distilled from China’s many dynasties and ethnic groups, is known for its richness and expressiveness and is one of the most comprehensive dance systems in the world, according to the Shen Yun website.

“It was amazing. It didn’t look like they were trying to dance. … You could tell it was embedded in them—it’s a part of who they are.”

Since its humble beginnings Shen Yun Performing Arts has grown exponentially. Formed by a group of leading overseas classical Chinese artists in 2006, the nonprofit organization now boasts four companies—each with its own full orchestra—that simultaneously tour the world each season.

This year the Shen Yun Orchestra also began touring independently, due to the popularity of its one-of-a-kind musical ensemble that blends Eastern and Western instruments. Its first Canadian concert was in Toronto in October.

Kerry Stratton, seasoned conductor of the Toronto Concert Orchestra and Wish Opera, said the orchestra is skilled, unique, and fascinating.

“I don’t think I will see two concerts like this all year. How can there be another one? I would have to follow this orchestra,” he said.

Much attention has also been given to the show’s artistic elements such as its digitally animated backdrops and enchanting costumes.

Robert Stromberg, Oscar-winning production designer of “Avatar,” was highly impressed by the creative, high-tech effects after seeing Shen Yun in Los Angeles in 2010.

Vanessa Harwood, an Officer of the Order of Canada and a former principal dancer with the National Ballet of Canada, saw the show several times in Toronto.

“Fantastic! So elegant and beautiful,” she said of the performance. “It’s a new realm of dance—there’s a lot of depth to it, and a lot of meaning.”