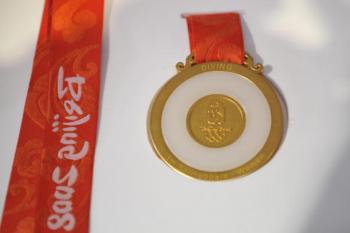 The gold medal for the 2008 Beijing Olympics. (AFP/Getty Images)
Opinion

At the Athens Olympics four years ago, the Chinese Olympics Delegation won 32 gold, 17 silver and 14 bronze medals; it was only second to US, which had won 35 gold metals. For the forthcoming Beijing Olympics, where expectations see China winning the majority of all medal totals, the Chinese Olympic Delegation will send nearly 600 athletes, far exceeding 407, the number of athletes sent to Athens.

While these statistics may be exciting for the Chinese people, many may not have considered how a country that is ranked around 100th in the world for GDP per person can win over the U.S.—ranking in the top 10 countries for GDP—to become the top sports nation in gold metal totals. Especially for a country that still has more than 200 million living below the poverty line, some believe China’s anticipated high medal ranking represents a poor allocation of resources.

How Much for a Gold Medal?

To put this in perspective, the article points out that the 700 million yuan used to win one Olympic gold medal can build 3500 elementary schools, rescuing 350,000 children from poverty due to lack of education.

Such a contrast is shocking. In a country where the budget for education, science, research and social security is extremely tight, many believe the 700 million yuan to win one gold medal could be better spent. Like an exploding bomb, “The Trap of Olympic Gold Medal”  received an enormous response from across Chinese society. Of course while gold medals are something people look forward to, some are beginning to think that the cost is too high.

Funded by a Billion Taxpayers

Although the General Administration of Sports of China never publicized all the numbers invested in preparation of Olympic Games, Bao Mingxiao, Head of Center for Sports and Social Science Research under the Administration estimated that the country invests approximately four to five million yuan ($590,000–$730,000) on one Olympic athlete. Assuming there are 400 athletes in China’s Olympic Delegation, the total cost is between 1.6 to 2.0 billion yuan ($234 million to $292 million). Convert the investment for each gold medal based on the 32 won in the last Olympics, and the cost for one gold medal is 500-600 million yuan ($73 million to $87 million).

Chinese track star Liu Xiang won a 110-meter hurdle at the Athens Olympics. Before this, his annual expense was about three million yuan, which included an environmentally-friendly running course for over a million yuan and several hundred thousand yuan for a new set of hurdles. The amount China spent on Liu Xiang could equal several hundreds even thousands of Elementary Schools of Hope—charity schools for kids in poor areas of China.

Wu Shouzhang, vice chairman of China’s Olympic Committee commented that the total cost for this endeavor is very difficult to calculate. He adds that, besides Liu, there are also medical doctors, scientists, nutritionists, field workers, document workers, as well as early investments made by Shanghai, Liu’s home city.

According to the “Report on China’s Olympic Gold Medal” issued by the China Branding Research Institute, the commercial value for Liu Xiang’s gold metal was worth 461 million yuan ($67.5 million) last year.

This Internet user believes that a huge number of gold medals represent “a diseased inverted pyramid type of sport system. It has nothing to do with the sporting achievements enjoyed by common people. Primary and junior high schools at basic level cannot even provide students any fields for athletics. Sporting facilities for the masses are almost nonexistent in the countryside.”

Renowned Taiwanese writer Lung Ying-tai questioned how China gained its 32 gold medals. She found that the country used a huge amount of taxpayer money to set up sport schools at various levels. In comparison, with other sports superpowers such as the U.S., Germany, and Japan, the majority of their achievements are display of the results from across the entire population.

China’s situation is just the reverse. There are many sports venues, but they are not open to general public. Rather they are only reserved for a few specific people. China has an amazing sports budget, but it doesn’t go to national athletic programs. Instead it is used to train a few medal winning stars. Western countries use competitions to encourage athletic excellence for all, and to improve citizens’ health. In China, competitions are for publicizing Chinese regime’s prestige to the outside world. They seem to have little interest in promoting the health of its citizens.

So does the Chinese regime believe that gold medals are more important or people’s livelihood?  “We’ve been asking this question for some time,” say human rights activists, “and the consideration has those who see the truth demanding: ‘Human Rights before Olympics’!”

Olympic Projects: A Source for Corruption

Moreover, many Chinese officials spent large portion of public funds to inspect abroad in the name of the Olympics. The audit storm in 2004 exposed the scandal of General Administration of Sports of China appropriating Olympic special funds to build houses. Hence some Internet users exclaimed, “Olympics, Olympics, how many corruptions are undertaken in your name!”

According to an Associated Press report, Beijing Vice-mayor Liu Zhihua—who oversaw the Olympic construction projects costing 280 billion yuan ($US 41 billion)—was under investigation for corruption. He was dismissed in June 2006.

Observers point out that Liu had an opportunity to gain a large amount of ill-gotten gains just before and right after Olympic construction began. The bidding process alone could make him very rich.

China’s Olympic project is a major endeavor overseen by the Chinese regime. This authoritarian regime does not allow independent judiciary or media supervision, so power monopolization and behind-the-scenes deals are common. Without freedom of the press and media supervision, the oversight is Chinese communist’s own anti-corruption system.  In such a situation, embezzlement is common.

In reality, no one can know just how much Chinese taxpayers have paid for a single gold medal. Yet one thing is certain: while these gold medals give prosperity to corrupt officials and a few elite athletes, the Chinese people who paid for them will not benefit from it at all.