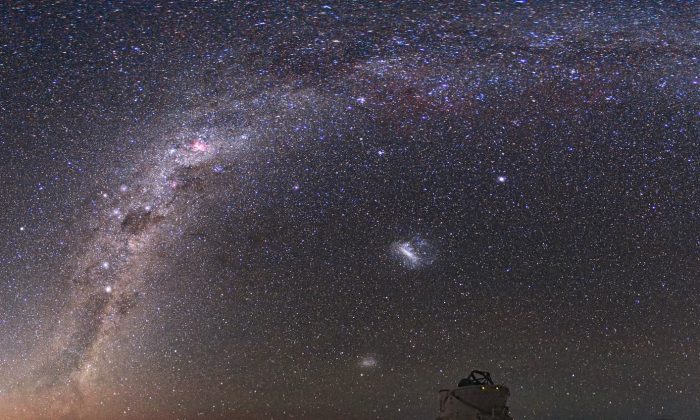 Cosmic Radiation: the Dawn of New Physics or Statistical Slip-Up?

Recent observations suggest that there is something not quite right with our view of our universe – that something is skewing our view of the oldest radiation arriving at our telescopes.

What’s causing this skewing? Is it new fundamental physics, or something as bizarre as a collision with another universe?

While these are extremely exciting, a study published today in the Journal of Cosmology and Astroparticle Physics suggests the solution is much more mundane – it’s the way the data was originally analysed that produced apparently significant anomalies.

Science fiction author Isaac Asimov famously said: “The most exciting phrase to hear in science, the one that heralds new discoveries, is not ‘Eureka!’ but ‘that’s funny’.”

So What’s So Funny?

Scientists are always looking for anomalies, those bits of experimental data and observations that disagree with prevailing theories and ideas. Anomalies point the way to new research directions and open new doors to revealing the universe’s secrets.

For today’s cosmologists, the search has taken on a new urgency, not because things are so terrible, but because things are so good. Our current models of the universe work amazingly well. They accurately explain the distributions and motions of galaxies as the result of dark matter, dark energy and gravity.

They also accurately explain the patterns on the Cosmic Microwave Background, the radiation left over from the overheated birth of the universe. This pattern is the result of the complex physics of the early universe, from the growth of the first seeds of galaxies.

Through successive experiments – with the Cosmic Background Explore (COBE) satellite in the 1990s, the Wilkinson Microwave Anisotropy Probe (WMAP) in the 2000s and most recently the Planck telescope – we have revealed finer and finer detail. And within the finery, no anomalies have been uncovered.

This worries cosmologists, as we know that our mathematical models cannot be complete. We know that the two leading scientific theories, gravitation and quantum mechanics, do not work together. We would hope therefore that the patterns on the Cosmic Microwave Background would give us some clues.

Anomalies in the System

But while the fine detail agreed, the larger-scale aspects of the patterns appeared to deviate from expectations. Cosmologists have jumped upon these anomalies (given affectionate names such as the Axis of Evil and the cold spot) as evidence for a whole range of exotic physics, including uneven expansion, left-handed universes and cosmic collisions. Perhaps these are the clues we’ve all been waiting for?

Except it is not that simple. One of the complexities of observing the cosmos is that our sun is embedded deep within the Milky Way galaxy, surrounded by other stars, gas and dust. This means that large tracts of the sky are effectively unobservable, hidden by our own galactic foreground.

And this is particularly bad for observations of the Cosmic Microwave Background, as the dusty material in the Milky Way emits at similar wavelengths, contaminating the signal cosmologists are searching for.

A New Look at the Image Data

Today’s paper re-examined the approach typically used when faced with such contamination, masking out the regions of the sky where galactic emission appears to dominate.

The work, by European cosmologist Anaïs Rassat and collaborators, revealed something surprising, that the very act of masking appeared to artificially enhance some of the anomalous signals. This, of course, is quite a worry if you hoped these anomalous signs were pointing to something interesting!

But Rassat went further and examined additional sources of background signal that had previously been considered inconsequential. These included a detailed examination of the motion of the Milky Way through the local environment, and a subtle signal due to the path of Cosmic Microwave Background photons over billions of light years.

Now, you might think this is a great success, as our current theoretical expectations and observations are an even better match. And, in truth, it is. But if you are hunting for clues to new physics, the Cosmic Microwave Background is proving very uncooperative.

It’s important to acknowledge that observations of the feeble cosmic radiation are not easy to obtain and analyse, and accounting for contamination and backgrounds within a weak signal is never going to be easy. This new paper helps bring clarity to this in our observations of the Cosmic Microwave Background.

We should expect anomalies to pop up when we scrabble about in the noise of experiments and observations at the cutting-edge, to be followed by rampant theoretical speculation. Some anomalies will melt away when examined with deeper scrutiny, while others will get stronger, providing new clues and new directions.

Science at the cutting-edge is rarely clear-cut, and answers are hardly ever black and white. It’s always important to remember that.