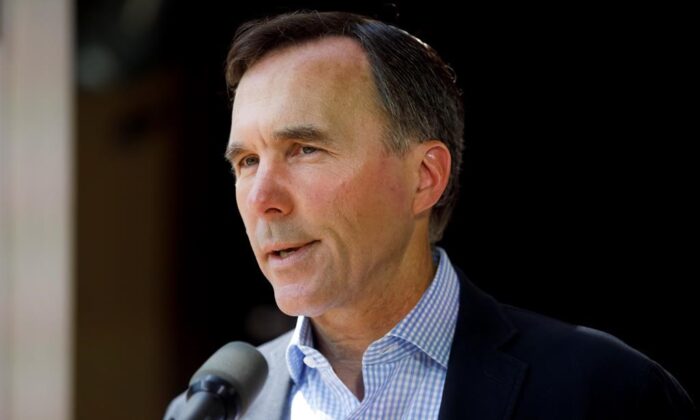 Finance Minister Bill Morneau speaks to media during a press conference in Toronto, on July 17, 2020. (The Canadian Press/Cole Burston)
Canada

‘Corruption or Incompetence’: Scheer on Government’s Decision to Award WE Contract

OTTAWA—The Opposition Conservatives accused the Liberal government of either corruption or ignorance Monday as they pressed for more answers around a decision to hand control over a major student grant program to an organization with longtime ties to the Trudeau family.

The House of Commons was sitting to pass a new bill to extend the wage subsidy program, send a special COVID-19 top-up to people with disabilities, and to extend legal deadlines for court cases.

While those measures were expected to pass on Tuesday with the support of all opposition parties, the same collegial spirit did not extend to question period.

There, the dominant line of inquiry was around the Liberal government’s decision to award WE Charity the responsibility for a $900 million student job program.

Prime Minister Justin Trudeau’s mother, in particular, has received hundreds of thousands of dollars in fees for participating in WE events, and Finance Minister Bill Morneau’s daughter works for an arm of the WE organization.

The organization has handed the program back to the government. Both Trudeau and Morneau have said they should have recused themselves from the decision.

But the international development and youth empowerment group is now under scrutiny for its internal practices, adding further fuel to the opposition’s charges that the decision to grant the contract to WE was suspect.

Conservative Leader Andrew Scheer pointed Monday to a report by Canadaland that red flags were raised in 2018 by auditors reviewing WE’s financials, as well as the fact that their board had undergone a major shakeup earlier in the year.

“Either the Liberals were aware of these issues and still approved the decision or they were incompetent,” he said.

“It’s either corruption or incompetence, which is it?”

It is neither, Deputy Prime Minister Chrystia Freeland replied repeatedly, nearly reading verbatim from a sheet of paper with the Liberals’ current top-line talking point on the issue: that the idea of having WE run the Canada Student Services Grant was brought forward by the non-partisan public service.

“The way this unfolded was regrettable and the charity will not longer be administering the project,” she said.

NDP Leader Jagmeet Singh said the government’s approach to WE raises questions about whether the program was ever about students at all.

“There were lots of ways to help students. This was not it,” he said.

“It was a billion-dollar bailout of close friends of the Liberal party and of the prime minister.”

The House of Commons had been recalled to pass the latest suite of COVID-19 measures.

The Liberals want to extend the wage subsidy program to December and have its criteria loosened so more businesses can reopen and employ workers.

The original program covered 75 percent of wages, up to a weekly maximum of $847, for eligible companies and non-profits. Companies had to show a 30 per cent drop in revenues.

The proposed changes will see the program pay on a sliding scale based on revenue drops due to the pandemic, with the hardest-hit businesses eligible for a 25 per cent increase to the previous maximum payment.

The disability payment measures in the bill would provide up to $600 in a one-time payment to some Canadians with disabilities in order to help with COVID-19 costs.

The Liberals had sought to pass that measure in a bill last month, but did not get unanimous consent due to the opposition concerns with other elements in that particular bill.

Originally, the payment was limited to those who received the disability tax credit, but the new bill lays out expanded criteria to include, among others, veterans who are currently receiving disability supports.

Singh said ensuring the disability benefit went too far more Canadians was a win for his party, and why the NDP will back the new bill.

“It’s still not enough and we will continue fighting,” he told reporters afterwards.

The Tories said they too support the disabilities measures, but the new wage subsidy plan is too convoluted and they want the government to make it simpler.

Still, they intend to back the bill, having won concessions of their own: to get two days of debate for it instead of one, and at the same time securing the ability for the Commons committee on Canada-China relations to sit, as well as the public safety committee.

Tuesday’s sitting also opens up an opportunity for the Conservatives to do something else they were hoping to achieve Monday, but couldn’t—press the prime minister himself.

Trudeau took the day off Monday, and the Tories suggested he was skipping out on questions about WE.

He is expected to attend Tuesday’s sitting, as well as for the special COVID-19 committee of MPs that is scheduled to meet Wednesday.

A lingering question is whether Trudeau will also appear at the House of Commons finance committee, where MPs want to grill him on the WE issue.

Scheer said Liberal MPs should also be asking themselves questions about supporting their boss going forward.

“If they allow him to continue, if they don’t demand he resign, then they are telling Canadians that they are comfortable with his corruption,” Scheer said.