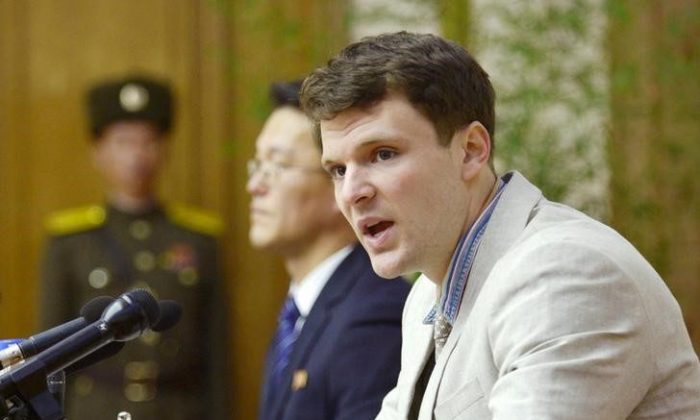 Otto Frederick Warmbier, a University of Virginia student who has been detained in North Korea since early January, attends a news conference in Pyongyang, North Korea, in this photo released by Kyodo Feb. 29, 2016. (Reuters/Kyodo)
US News

The coroner’s report on Otto Warmbier’s death raised more questions about the circumstances surrounding the young man’s passing while contradicting the accounts of his parents.

Warmbier had a number of small scars on his body, but none were severe enough to indicate torture, according to the Cincinnati Enquirer which obtained a copy of the coroner’s report.

Unlike the gruesome descriptions of Warmbier’s state by his parents on Sept. 25, the coroner found no sign of damage to his teeth, nose, or ears. Warmbier’s parents said on Tuesday that he was deaf and blind when he first arrived in the United States and that “someone had taken a pair of pliers and rearranged his bottom teeth.”

“The teeth are natural and in good repair,” the report stated, while his nose and ears show no signs of “remarkable alteration.”

Warmbier’s parents declined an autopsy, so the coroner was limited to examining the 22-year-old’s body. The report concluded that Warmbier died from brain damage from to lack of oxygen “due to an unknown insult more than a year prior to death.”

The coroner found a number of small scars on Warmbier’s body, some of which were older, while some fresh. The location of the newer scars could raise additional questions. One scar on the side of his neck could be from a medical treatment like an intravenous line, the Enquirer noted. Another scar on Warbier’s chest was similar to a “tracheostomy scar” used for inserting a breathing tube, the report stated.

Warmbier returned to the United States on June 13 after 15 months in North Korean custody. He died six days later.

The conclusions of the report are in sharp contrast to what Warmbier’s parents said they saw when he first arrived in the U.S.

“We got halfway up the steps, we heard this howling, involuntary, inhuman sound, we weren’t really certain what it was,” Fred Warmbier, the father, told Fox and Friends. “Otto was on the stretcher and he was jerking violently, making these inhuman sounds.”

“Otto had a shaved head, he had a feeding tube coming out of his nose, he was staring blankly into space, jerking violently,” the father continued.

After the parents’ interview, President Donald Trump sent a message to almost 40 million of his followers on Twitter.

“Otto was tortured beyond belief by North Korea,” Trump wrote.

The release of the report comes amid heightened tensions between North Korea and the United States. Communist dictator Kim Jong Un is adamant about developing a nuclear missile capable of striking the United States, despite unprecedented sanctions and warnings from President Donald Trump and the United Nations.

Trump has said that the United States will totally destroy North Korea if a threat arises to the U.S. or its allies.