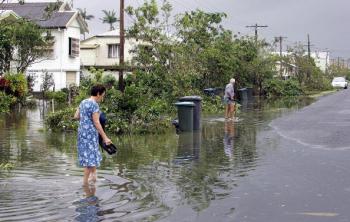 North Queensland experienced extreme rainfall and floods earlier this year while the south east of Australia was experiencing heatwaves and off the scale bushfires. (Torsten Blackwood/AFP/Getty Images)
US

Copenhagen the Focus as Australia Shows Effects of Climate Change

By Shar Adams
Print
A ustralia is exhibiting climate change weather patterns that were not predicted to manifest till 2020, says one of the country’s most prominent climate change scientists.

Professor Ian Lowe, AO, an award-winning scientist and author of a number of books on climate change, said that when he wrote his first book, Living in the Greenhouse, in 1989, he summarised what scientists were saying would occur in 2020 if climate change was not addressed.

This included predictions that average temperatures would increase; it would get drier in southern and eastern Australia, and wetter in northern Australia; there would be more frequent extremes like floods, cyclones, extended dry spells, heat waves and severe bushfires; and vector-borne diseases like dengue fever would spread.

Speaking at a forum organised by the Australian Conservation Foundation (ACF), of which he is president, Professor Lowe said:

“I don’t have to remind you that in February this year, we had extreme heatwaves in South Australia and Victoria, devastating bushfires in Victoria, cyclonic weather on our northern coasts, severe flooding in Queensland and northern NSW, and a dengue outbreak in [north Queensland’s] Cairns that was up to 350 cases [at the time of speaking],” he said.

Professor Lowe went on to say that not one of the events could be described as “unarguably” a result of climate change, but the overall pattern is what had been predicted.

“Perhaps we can be concerned that that was what the science was saying 20 years ago would be occurring by the 2020s and we are already seeing it in 2009,” he said.

Environmentalists, climate change activists and even members of the ACF board were taken aback earlier in the month when Professor Lowe and Chairman of the ACF, Don Henry, announced they would support the Australian Government’s emission trading scheme after changes were made to the original submission.

The scheme, titled the Carbon Pollution Reduction Scheme (CPRS), falls far short of the recommendations made by Professor Ross Garnaut, the author of the Government-commissioned report on climate change.

Other environment groups, including Greenpeace, the Wilderness Society, Friends of the Earth and GetUp, have declared their opposition to it.

Professor Lowe said he and Mr Henry had also been very disappointed in the CPRS for a number of reasons, including the proposed 5 per cent cut in emissions from the 2000 level rather than the hoped for 20 to 40 per cent cut from 1990, the generosity to big polluters who were given carbon permits rather than purchasing them through auction, and the lack of credit for voluntary reductions.

He was also critical of the recent government changes to the scheme that have delayed the rollout till 2011 (“so it is an urgent problem we don’t need to do anything for another two years,” he derided) and of the reduction in price for carbon from $40 to $10.

There were, however, some positives, including that the Australian Government said it would be prepared to go to 25 per cent if others agreed in Copenhagen to set a target of 450 parts per million. There is also a built-in review of the generous handouts after international agreement is negotiated and “there is a serious renewable energy target and some energy efficiency measures that are obviously laudable,” he said.

Professor Lowe said that on balance: “The new arrangement was better than no arrangement, although obviously still far short of what the ACF thinks is necessary or what the science says is necessary.”
Copenhagen

The bottom line, however, is the United Nations meeting in Copenhagen (December 7–18, 2009), he said.

According to Tony Mohr, the ACF’s Climate Change Campaigner who is presently in the Swedish capital for pre-meeting discussions, Copenhagen will determine the international strategy that will replace the Kyoto Protocol due to finish in 2012.

“The Copenhagen meeting is probably our best, but possibly our last, chance to avoid dangerous climate change,” Mr Mohr said.

Professor Lowe said the ACF had decided to give the Government’s emissions scheme “qualified support” in order to focus on Copenhagen.

“The main objective of our climate change work has to be to get a decent agreement in Copenhagen. In those terms, moving Australia to being no longer an obstructive player at best in Copenhagen was more important than a slow start and weaker target in the first few years.

“The real aim has to be to build the momentum that is now building up around the world to get a solid agreement in Copenhagen,” he said.