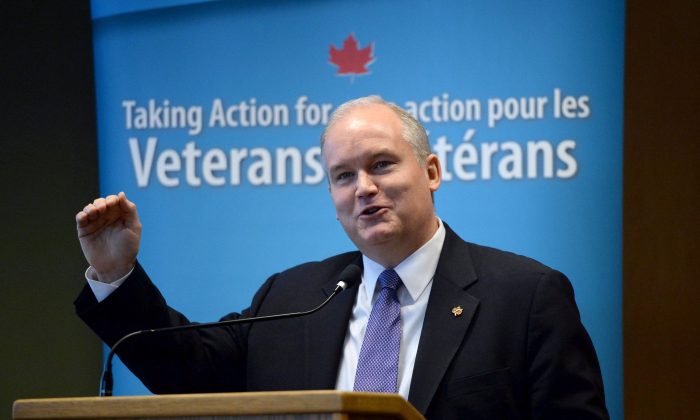 Veterans Affairs Minister Erin O’Toole speaks during a Veterans Affairs stakeholder summit in Ottawa on April 14, 2015. The widespread criticism of the New Veterans Charter isn’t justified, despite the fact it has been amended multiple times, O’Toole said this week. (The Canadian Press/Sean Kilpatrick)
Canada

OTTAWA—Ten years ago, politics prevented the government from clearly explaining its overhaul of how former soldiers are compensated, and the repercussions echo to this day, says Veterans Affairs Minister Erin O’Toole.

The widespread criticism of the so-called New Veterans Charter isn’t justified, despite the fact it has been amended multiple times, the minister said April 15 in a wide-ranging interview with The Canadian Press.

The policy is misunderstood by supporters and detractors alike, O’Toole said.

“I really wish I’d been a veterans affairs minister in 2006 because we haven’t had a proper discussion on the New Veterans Charter—how it works, what it’s geared to do—and that’s a result of politics.”

The program was introduced by the Liberals in 2005 and implemented by the Conservatives after the 2006 election that saw Prime Minister Stephen Harper take the helm of a minority government.
It retooled how disabled veterans received financial support from the government, including a controversial switch from lifetime payments to a single lump-sum system.

Nobody talked about why they moved to this model, which is far superior.
— Veterans Affairs Minister Erin O'Toole

One is currently suing the government over the changes, arguing that the new payment system is discriminatory because it awards less than what a civilian worker could receive if he or she was injured.

While O’Toole said the charter is aimed at getting medically released soldiers into new careers, critics say it does the opposite, clawing back financial benefits for those who do return to jobs, leaving them little incentive to try.

That can’t be blamed on politics, said Sean Bruyea, a former intelligence officer and longtime critic of the charter.

“The reason why there’s been a failure to communicate the New Veterans Charter programs is because the program itself is a failure,” he said.

O’Toole acknowledged the program is not perfect, repeating the government’s characterization of its shortcomings as unforeseen “gaps.”

Critics say that’s because no one ever consulted veterans about their needs. Among the so-called gaps was the fact that more than 400 severely disabled veterans lost their disability benefits upon retirement. A new benefit to top that up was introduced last month.

“I think the good thing is now we leverage the strengths of the New Veterans Charter,” O’Toole said. “Soon, I’m going to be dropping the “N” because I think we have to talk about the Veterans Charter. It’s living.”

O’Toole, who served in the navy, took over the portfolio in January after the relationship between the veterans’ community and the Harper government deteriorated to the point that advocacy groups were threatening to actively campaign against the Conservatives.

The Tories were left with a political problem they hadn’t anticipated—declining support among the public who saw them as attacking veterans, damaging their carefully cultivated image as champions of the military.

O’Toole said when he took over the job from Julian Fantino, he had a lengthy conversation with Harper about the problems he was facing within the department, and got the green light to make changes.

The shift in political will was in part prompted by a changing understanding of mental health over the last five years, O’Toole said.

“This isn’t an excuse, but I think people are realizing now that a conflict like Afghanistan will have physically injured and will have mentally injured,” he said.

“Mentally injured may not self identify on the battlefield or on the way home. It may be two, four, 10 years later. This was the real fundamental challenge.

“Are political leaders ready now? Yes, they are.”