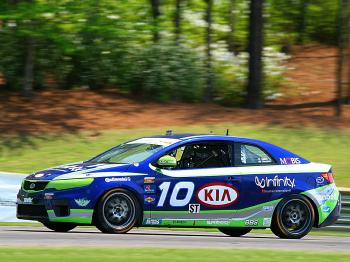 Michael Galati, who was added to the team at Homestead, was overjoyed by the team’s success.

“How can I express my feelings right now?” he asked Grand Am.com. “It is fantastic for the whole team.

“This weekend we had some problems during practice—I only had like four laps four laps before qualifying.” [Practice accidents cut short the Continental Tire practice sessions.]

“I went out there in qualifying and made a couple mistakes—we should have been a little but better but during the race I put my head down and just drove it.

“The car was really good. I’ve got to hand it to all the guys Kia of America and the whole Kinetic team and my co-driver Nic—all the guys did outstanding jobs, all the guys back at the shop. I am so proud to be part of this team.”

Co-driver Nic Jonsson was equally enthused. “It's so fantastic—bringing Kia Motors to the top of the chart in one of the toughest sports car series in the world in less than two years.

“The goal for this year was to have one or two podiums. Now we have a first and a second."

The ST class started out as repeat of Homestead, with the brothers Matt and Mark Pombo’s #31 i-Moto Mazda Speed 3 battling the #27 Freedom Autosport Mazda 3 of Eric Foss and Brad Rampleberg.

John Capestro-Dubets in the #81 Bimmerworld BMW 328i and Derek Whitis in the #25 Freedomsport Mazda MX5 fought for third early on, until Rob Finlay in the GS-class #50 Finlay Motorsports Mustang put Capestro-Dubets into the gravel at Turn Ten on lap 26.

Ramplelberg’s Mazda took the lead when everyone pitted under yellow, with Chris Gleason Jr.’s #181 APR VW and Trevor Hopwood’s #Kinetic Motorsports Kia behind him.

That didn’t last. Owen Trinkler in the #198 RSR Motorsports Mini passed both Rampelberg and Gleason ot take the lead on lap 33.

After a caution five laps later, the race restarted on lap 45 with Trinkler in the lead followed by Mathew Pombo and Nic Jonsson in the #10 Kinetics Kia. Jonsson. Pombo took the lead from Trinkler on the next lap, only to lose it to Nic Jonsson on lap 54.

Ian Baas in the #171 APR VW had moved to third and was pressing Pombo when the pair of cautions slowed the field. In the brief burst of racing between the yellow flags, Bass managed to take second, reminding everyone of his last-lap grab of the win at Homestead.

Baas was not to repeat his Homestead win, however; he fell to third when the green flag waved on lap 70, as BJ Zacharias in the  #14 Doran Racing BMW 1281 and Jesse Combs in the #56 Race Epic BMW 3281 both got past the VW driver.

Zacharias pushed hard but couldn’t catch Nic Jonsson who motored home to win by a margin of .684 seconds, giving the #10 Kinetics Kia its first win since entering the series last season,

The #32 i-MOTO Mazda Speed 3 of Taylor Hacquard and Pierre Kleinubing, took fifth, while their teammates The Pombo brothers, despite leading 36 laps could manage no better than sixth.

The Continental Tire Sports Car Challenge travels to Virginia International Raceway near Danville, Va., for the Bosch Engineering 200 on Saturday, May 14, running in conjunction with the Rolex Bosch Engineering 250. Tickets are available at the VIR website ticket page.