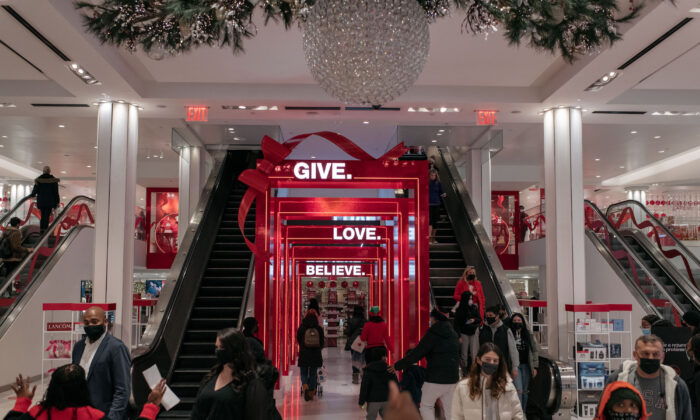 Consumers Brace for Even More Inflation This Christmas Shopping Season

Consumers are likely to feel inflation bite when they go Christmas shopping this year, with a new forecast from Salesforce estimating retail prices will rise by as much as 20 percent this holiday season compared to last year.

Salesforce expects a strong Christmas shopping season this year, estimating sales will top $1 trillion globally, the company said in the Sept. 29 forecast. But it warns of persistent supply-side pressures and expects everyone along the chain to feel the pinch of rising costs.

“Increased costs appear to be front and center this year for retailers, suppliers, and consumers,” Salesforce said in the forecast, which estimates that the retail industry in the United States will face an extra $233 billion in the cost of goods sold around Christmas.

Higher shipping costs, manufacturing capacity constraints, and a shortage of workers are chiefly to blame, the company says.

While Salesforce’s retail inflation prediction of up to 20 percent this season over last year’s seems high, it taps into some of the numbers seen in the consumer price index (CPI), one of the government’s official inflation gauges. While the most recent CPI data (pdf) showed energy prices rising 25 percent over the year in August, and some categories like bacon (+17 percent) and used cars (+31.9 percent) up sharply, retail goods generally saw more modest price hikes.

Retail products that saw the highest over-the-year price rises in August, the most recent month of available data, include women’s dresses (+11.9 percent), jewelry and watches (+12.9 percent), televisions (+13.3 percent). Most retail categories saw much lower price growth and, in some cases, declines.

Miscellaneous personal goods were up 7.5 percent over the year in August, photography gear was up 5.6 percent, and musical instruments were up 3.2 percent. Computer software and accessories fell 1.2 percent, infant apparel was down 1.4 percent, and audio equipment was down 6.7 percent over last year.

“Bottlenecks at ports and skyrocketing container costs, two of the key pressures shaping the holidays, should cause consumers to be concerned about product availability,” the company said in the forecast.

Customers are already responding to anticipated shortages by heading out early, with pre-Cyber Week shopping up 6 percent in the United States compared to last year.

“With persistent global supply chain disruptions, retailers must draw consumers to their online and physical stores early in the season to fulfill demand and capture holiday spending,” said Rob Garf, vice president and general manager of retail at Salesforce.

Surging prices have been a key theme amid the economic recovery, rising faster than wages and eroding the purchasing power of Americans.