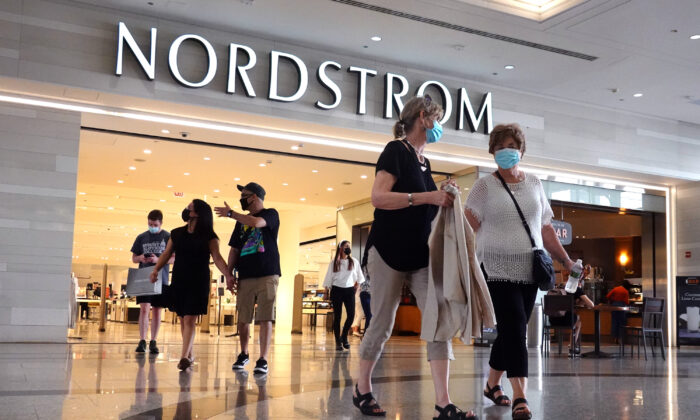 Shoppers leave a Nordstrom store in Chicago, on May 26, 2021. (Scott Olson/Getty Images)
Economy

Consumer Spending Weakens In May, Another Red Flag for US Economy

U.S. consumer spending in May was lower than anticipated, while rising prices reduced consumer spending, according to the U.S. Bureau of Statistics’ personal consumption expenditures index (PCE) released on June 30.

The PCE index happens to be lower than the Consumer Price Index (PCI), which increased 8.6 percent year on year in May.

The price index showed that prices for May increased 6.3 percent year over year, driven by the increases in both goods and services.

There was a 0.2 percent, or $32.7 billion, increase in consumer spending in May, down from the 0.6 percent jump in April.

Inflation-adjusted spending declined by 0.4 percent in May, the first time in five months, while real spending when calculated after taxes, actually declined by 0.1 percent, a sign that wage increases are struggling to keep up with price increases.

Regarding spending on services, there was a 0.7 percent increase, led by housing, utilities, international travel, and health care.

There was a decrease in household spending on goods led by vehicles and household appliances at 3.2 percent, which was partly offset by an increase in gas and other energy items.

Excluding the food and energy sectors, the price index rose 0.3 percent for the fourth straight month.

The core PCE readings on inflation are highly valued by the Federal Reserve, with the annual rate of core consumer price growth slowing to 4.7 percent in May from 4.9 percent in April, the smallest increase since last November.

The new government report suggested that inflation had probably peaked, which may provide some relief, but rising inflation remained high enough to keep the Federal Reserve on its aggressive path to tighten monetary policy.

The central bank on June 15 raised its policy rate by 75 basis points, its biggest hike since 1994, for a total increase of 150 basis points since March.

The dramatic rise in interest rates and worsening financial conditions for households are raising fears of a recession.

Annualized production output decreased at a 1.6 percent rate during the first three months of the year, according to an earlier report from the government agency.

The S&P Global Market Intelligence report said that U.S. GDP will contract at a 0.7 percent annual rate in the second quarter, after previously expecting some slight economic growth.

The Federal Reserve Bank of Atlanta estimated on June 30 that economic output will have contracted by 1 percent for the second quarter, after reviewing publicly released data on activity through May.

Jobless claims dropped lower last week, despite layoffs in technology and in real estate, according to other data released today.

Initial claims for unemployment benefits fell by 2,000 to a seasonally adjusted 231,000 for the week ended June 25, according to a separate report from the Labor Department.

The tight labor market has meanwhile led to solid wage increases, with an increase of 0.5 percent in May, contributing to the 0.5 percent rise in personal income.

Meanwhile, stocks on Wall Street fell lower, with the dollar remaining steady against a basket of currencies, and U.S. Treasury prices rose.