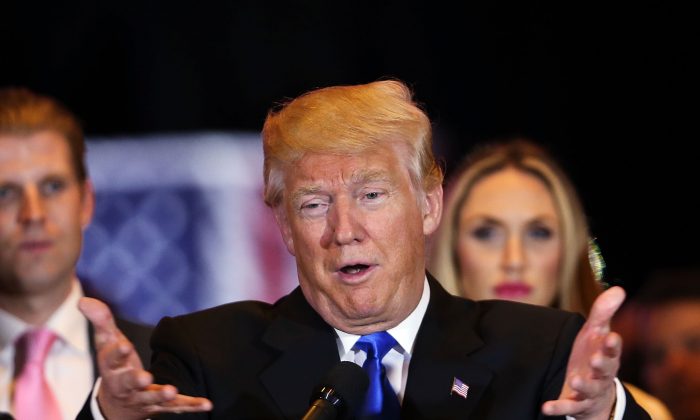 Republican presidential fcandidate Donald Trump speaks to supporters and the media at Trump Tower in Manhattan following his victory in the Indiana primary on May 03, 2016 in New York, New York. Trump beat rival Ted Cruz decisively in a contest that many analysts believe was the last chance for any other Republican candidate to catch Trump in the delegate count. (Photo by Spencer Platt/Getty Images)
2016 race

Donald Trump dealt a knock-out blow to Ted Cruz in the Indiana primary on May 3, effectively making Trump the presumptive nominee of the Republican party.

Some conservatives, however, aren’t happy with the news, and in a display of protest, took to Twitter to post videos of themselves burning their Republican voter registration cards.

I just left the GOP. pic.twitter.com/6M66a5VsQ5

@Reince @GOP @SeanSpicer #nevertrump After I vote down ticket, I’m out. pic.twitter.com/i2gKRv0icC

The frustration extended across the ranks of the Republican party, with some prominent conservatives, like former John McCain aide Marc Salter and blogger for RedState Ben Howe announcing their defection to Hillary Clinton.

the GOP is going to nominate for President a guy who reads the National Enquirer and thinks it’s on the level. I’m with her.

Others, like Senator Lindsey Graham (R-SC), made more provocative statements about the state of the party, with Graham saying “If we nominate Trump, we will get destroyed…….and we will deserve it.”

If we nominate Trump, we will get destroyed…….and we will deserve it.

Worries persist that Donald Trump being the nominee would signal a fundamental change in the Republican party—not only for the 2016 cycle, but for the next generation.

“If we nominate Trump, [the party] is lost beyond this cycle. I think we lose women for a generation, in big numbers,” said Katie Packer, who served as Romney’s deputy campaign manager, according to Politico. “So there’s a sense that if this is who my party is, I don’t really identify with it anymore.”

It’s unclear whether the extreme opposition towards the Trump candidacy within the rank and file of the Republican Party is a minority of reactionaries, or if, in November, when push comes to shove, most Republicans would vote for Trump over Hillary Clinton.

However, a lot of that depends on whether Trump can unite the party, as Republican National Committee Chairman Reince Priebus promises in a tweet.

.@realDonaldTrump will be presumptive @GOP nominee, we all need to unite and focus on defeating @HillaryClinton #NeverClinton

Priebus also said Trump’s win was “probably” a good thing for the party, and is looking forward to the general election with Hillary Clinton.

“You know what, I think something different and something new is probably good for our party,” Priebus said Wednesday on CNN, and called for unity against Democratic front-runner Hillary Clinton.

“Look, I don’t think anyone predicted what happened. So, look, we’re here. We’re going to get behind the presumptive nominee.”

Mike Huckabee, former Arkansas senator and ex-Republican nominee, said: “Ted Cruz was half right in his campaign speeches when he said that ‘conservatives are coalescing.’ In the end, they coalesced, all right, but around Donald Trump.”

In his victory speech, Trump said he wants to unite the GOP but has also said that he doesn’t want the endorsements of Republicans who were “nasty” to him.

“I’ve been saying for a long time that there’s some people that, I almost don’t want their endorsement, Republicans, because it was too rough and they were too nasty, and I don’t think it’s going to matter, frankly. It’s going to be me,” Trump said in a call-in interview on “Morning Joe” on May 4.