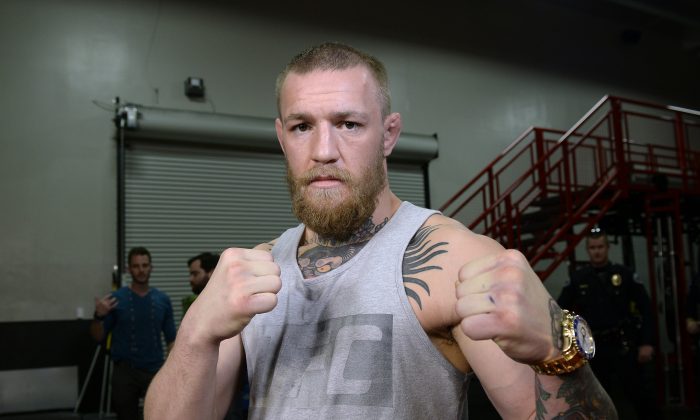 UFC featherweight champion Conor McGregor took to Facebook Sunday to rant about his shocking loss to Nate Diaz in UFC 196.

This is just depressing http://gms.to/1OXqE2l

McGregor, who won the first round against Diaz after battering Diaz’s face with an onslaught of punches, ran out of steam and ended up losing in the second round via submission. Said the always-confident McGregor on Facebook afterwards, “I stormed in and put it all on the line. I took a shot and missed. I will never apologize for taking a shot. [derogatory term omitted] happens.”

Fighting at the 170-pound class clearly had an effect on McGregor, who normally fights—and wins—at 145 pounds.

“I’ll take this loss like a man. I will not shy away from it,” continued McGregor.

“I will not change who I am. If another champion goes up 2 weights let me know. If your tired of me talking money, take a nap. I’ll still be here when you wake up with the highest PPV and the gate. Still talking multi 7’s. Thank you to the true support and [derogatory term omitted] the hate that came out of the woodwork. I love it all. Its still steak for breakfast. I’ve been here many times in my life in some form or another. I’ll eat it all and come back stronger.”

Though nothing’s been announced for McGregor’s next fight, it’s likely he’ll go back down to the featherweight division to defend his belt. Possible matchups include former lightweight champ Frankie Edgar or possibly a rematch with Aldo.

McGregor then finished with some words for rival UFC fighters Jose Aldo and Rafael dos Anjos as well as a hint at a rematch with Diaz.

“Nate I will see you again.”