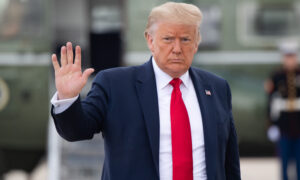 Maryland Governor: Pelosi 'Lost Touch' With Baltimore Community
0
Stephen Paddock, believed to be the shooter who killed at least 58 and wounded more than 500 in Las Vegas on the night of Oct. 1, 2017. (Twitter)
US

A congressman has made the claim that he received “credible evidence” recently which indicates ISIS could have been behind the terror attack in Las Vegas in October.

On Oct. 1, Stephen Paddock gunned down 58 people who were attending a concert outside Mandalay Bay in the capital of Nevada.

Several hundred others were injured when Paddock indiscriminately opened fire on the crowd of thousands from his hotel suite on the 32nd floor.

Rep. Scott Perry (R-Pa.) said this week that he believes potential ISIS connections have not been investigated thoroughly.

“Recently, I’ve been made aware of what I believe to be credible evidence or credible information regarding potential terrorist infiltration through the southern border regarding this incident,” Perry said during an appearance on Fox News.

Perry noted that ISIS, the radical Islamist terror group responsible for a number of attacks in the United States and Europe, had threatened an attack on America twice in the months before the massacre.

“Meanwhile, the local law enforcement investigative services are telling us there is no terrorist connection, lone gunman,” Perry said. “Something’s not adding up.”

Perry then claimed to have received evidence indicating a possible ISIS connection, but he would not reveal the specific evidence.

“I have received what I feel to be and what I believe to be credible evidence of a possible terrorist nexus,” Perry said. “And we’re going to have to wait until that situation develops.”

In a press conference on Jan. 19, Las Vegas officials said they still hadn’t pinpointed a motive behind the attack, leaving an opening to a terror connection.

Paddock killed himself before being apprehended on that fateful day, officers said.

Police released pictures of the suite, strewn with automatic weapons and bullets, on Jan. 19 in a preliminary report into the attack. At the press conference, it was also revealed that Paddock had child pornography images on his computers.

They gave the remains to one of his brothers.