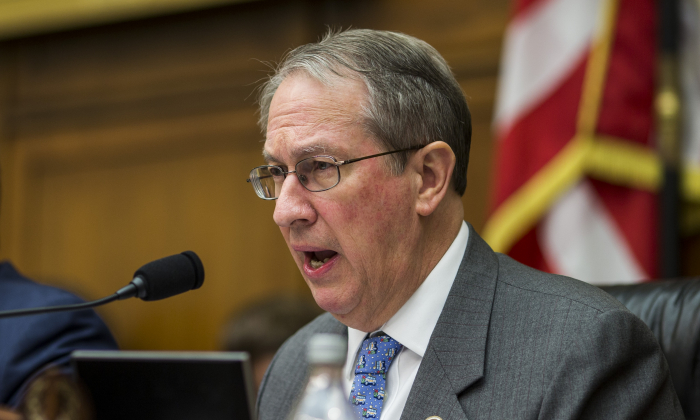 Rep. Bob Goodlatte (R-Va.) urged the nation’s top prosecutor to investigate a phone call in which a senior Obama administration official appeared to pressure former FBI Deputy Director Andrew McCabe to shut down the probe into the Clinton Foundation during the 2016 presidential election.

The details of the phone call were revealed in a report by the Justice Department watchdog that led to McCabe’s firing. The report states that the Principal Associate Deputy Attorney General (PADAG), one of the highest ranked officials at the Justice Department, called McCabe on Aug. 12, 2016, and asked why the FBI was still investigating the Clinton Foundation during the presidential campaign.

McCabe pushed back: “Are you telling me that I need to shut down a validly predicated investigation?” The ensuing conversation was “very dramatic,” according to McCabe. He told investigators that he has not had such a confrontation with a senior-level department official in his entire career. The PADAG at the time was Matthew Axelrod.

Goodlatte described the call as “disturbing” and called on Sessions to probe the conversation. The congressman also pointed out that the description of the call in the report is corroborated by a Wall Street Journal article which described a Justice Department official who was “very pissed off” that “FBI agents were still openly pursuing the Clinton Foundation probe during the election season.” McCabe authorized the leak about the call to the Wall Street Journal.

“It appears that the PADAG was at the very least inquiring into why the FBI was pursuing a case against the Clinton Foundation during the election, and at worst, attempting to improperly and illegally influence the status of an ongoing investigation for purely partisan purposes,” Goodlatte wrote. “Both options are unseemly and should be investigated.”

In addition to revealing details of the call with the PADAG, the report by the Office of Inspector General found that McCabe lied on several occasions, including under oath, about authorizing a leak to the Wall Street Journal. The report faults him for leaking with the intention of boosting his stature in the department. McCabe has been referred for criminal investigation over the statements. He denies having lied.

In addition, eleven congressmen referred McCabe for criminal investigation for his role in submitting a warrant application to surveil Trump campaign volunteer Carter Page. That warrant application was based largely on the unsubstantiated Steele dossier. The congressmen accuse McCabe of depriving Page of his rights and of investigative misconduct.

Axelrod was “one of DOJ’s highest-ranking officials and a member of the senior leadership team,” according to his profile at the Linklaters law firm, where he is a partner. Axelrod was fired along with his boss, Deputy Attorney General Sally Yates, shortly after President Donald Trump assumed office.

“Matt also took the lead in advising on crisis management within DOJ, working closely with the White House, Congress, the FBI, and the media on DOJ’s most sensitive and high-profile matters,” the profile says.