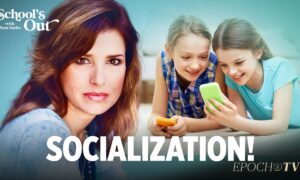 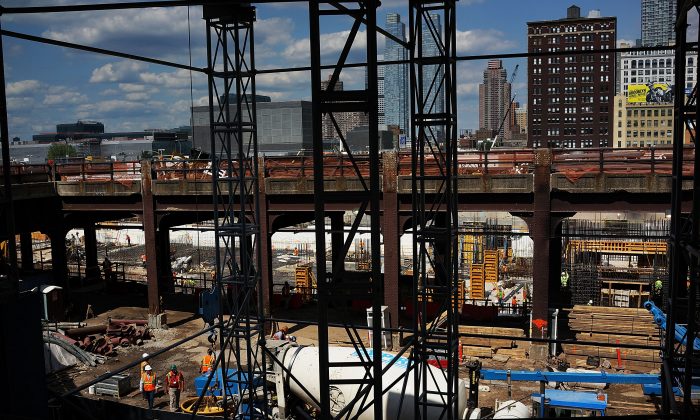 Construction at the Hudson Yards project in New York on Aug. 16, 2013. The project raised about $600 million in EB-5 funds, from 1,200 families. (Spencer Platt/Getty Images)
Opinion

Last week, Congress approved a temporary spending bill to allow the government to function through Dec. 9. In the midst of this temporary fiscal extension is the fate of the EB-5 Immigrant Investor Program. Congress continues to effectively slap a Band-Aid on the program, hoping to “revisit or fix” it after the politicized environment of election season dies down. Senators Patrick Leahy (D-Vt.) and Chuck Grassley (R-Iowa), who have repeatedly spoken out against the program’s problems, had hoped to force Congress to create real government oversight of the program—which is sorely lacking. Without such government oversight, reformers have had to rely on the diligent efforts of whistleblowers to unmask the rampant fraud and abuse within the EB-5 program.

The EB-5 Immigrant Investor Program provides foreign investors the opportunity to obtain lawful permanent residency—”green card” status—in the United States in exchange for investments of $500,000 to $1 million that create at least ten American jobs. Eighty-five percent of EB-5 visas go to immigrants from China, who five years after meeting program requirements can apply for permanent residency. More than $4.3 billion was invested and infused in EB-5 projects in 2015 alone. Although the program promises attractive benefits to both domestic ventures and foreign investors, it has also proven fertile ground for fraud.

Thanks in part to the efforts of whistleblowers, the Securities and Exchange Commission (SEC) and the Justice Department (DOJ) have been cracking down on this fraud aimed at visa holders and hopeful immigrants. In April 2016, the SEC filed a 52-count civil complaint against two Vermont businessmen who allegedly orchestrated the largest EB-5 fraud in history: an eight-year scheme through which they “systematically looted” millions from a $350 million pool raised from hundreds of foreign investors located in at least 74 countries. The scam not only robbed investors of cash, but also effectively negated the benefit investors hoped to gain: an increasingly difficult to obtain green card and a fast track to U.S. citizenship.

The charges in the Vermont swindle come on the heels of several late 2015 SEC enforcement actions, including civil fraud charges against:

• a physician and his office manager for allegedly diverting at least half of $20 million raised from forty Chinese investors and slated for construction of California nursing homes that were never completed;
• a Florida resident and her company, EB-5 Asset Manager LLC, who, according to the SEC complaint, diverted at least $1 million of an $8.5 million pool solicited primarily from Chinese investors to buy, among other items, a boat, two luxury cars, and a $2.5 million home;
• a Washington state developer who allegedly spent millions of investors’ money, some of it on cash withdrawals at casinos;
• and a San Francisco Bay Area oil and gas company accused of running a $68 million fraudulent scheme that raised approximately $8 million by targeting Chinese EB-5 investors—in part through Chinese language television, radio, and print media outlets—and squandered the money in a Ponzi-like scheme.

Increased government enforcement is a positive step toward combating these pernicious frauds against foreign nationals. And as shown by the cases above, prospective and current immigrants—and others who discover similar schemes—need not wait for the government to act. U.S. whistleblower laws allow those with information about fraud against the U.S. government to take direct action to bring the culprits to justice. As an added bonus, whistleblowers, including people who are not U.S.-based, can sometimes be rewarded for their efforts with a share of the money recovered from the fraudster. For example, the aforementioned $34 million case against Infosys was brought by a whistleblower through a U.S. law known as the False Claims Act (FCA), which allows individuals to bring lawsuits on behalf of the United States against people or companies who fraudulently obtain government money or fail to pay money owed to the government.

Similarly, EB-5 investment fraud can be reported through the SEC’s whistleblower program, which encourages those with knowledge of violations of U.S. securities laws, such as Ponzi schemes, to share information with the SEC. Whistleblowers under the SEC program are eligible for rewards of up to 30 percent of the amount recovered. Since the inception of the program, the agency has paid more than $85 million in awards to more than 32 whistleblowers. One of those 32 earned a $14.7 million award for blowing the whistle on an EB-5 fraud perpetrated against Chinese investors by a Chicago-based businessman who claimed to be building a massive convention and hotel complex.

Hopeful immigrants, no matter how sophisticated in their fields or powerful in their home countries, suffer a special sort of vulnerability when they risk their savings and lives’ trajectories to come to the United States. The DOJ and the SEC have demonstrated their commitment to pursuing bad actors ready to exploit this vulnerability to line their own pockets. But these frauds are so destructive to hopeful immigrants and so antithetical to American values that action cannot come soon enough. Whistleblowers provide a necessary safeguard not only for America’s public finances and policy priorities, but also for vulnerable immigrants risking their safety and livelihoods for a piece of the American dream.

Sarah Poppy Alexander and Rosie Dawn Griffin are attorneys in the San Francisco and Washington, D.C. offices of Constantine Cannon, specializing in the areas of fraud and whistleblower law.