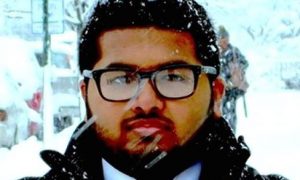 Confirmed: Tale of Teen Who Made $72 Million Trading Stock Was Completely Made Up

The internet was sent into a frenzy yesterday when news broke of a Stuyvesant High School student — named Mohammad Islam, who had made $72 million from trading stocks during school lunch breaks.

The story was originally published in Monday’s edition of New York magazine.

Later Monday, suspicions about the authenticity of the story arose, and Islam seemingly caved in a bit, saying that the number was closer to a few million dollars, but not $72 million.

We now know the actual number.

In an article by the New York Observer, Islam and his friend Damir Tulemaganbetov, who also featured heavily in the New York story, came clean in an exclusive interview.

In the interview, Islam basically confirmed that the story was completely made up. He has not invested and made any returns at all, though he says he did run an investment club at Stuy High.

Islam also mentioned that his parents are extremely disappointed.

Islam said, “Honestly, my dad wanted to disown me. My mom basically said she’d never talk to me.”

The friends also mentioned that they couldn’t believe the hype, and that Islam had received 297 unread messages and 190 LinkedIn after the story first broke.

Overnight, the boys were not able to sleep, and stayed up the whole night checking the news around the world.