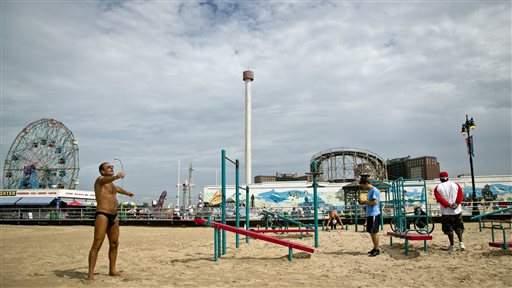 The Astrotower, center, at the Coney Island amusement park looms in the background as visitors exercise on a nearby beach on Wednesday, July 3, 2013. Crews working to dismantle the Astrotower have reduced the 275-foot tower to 145 feet tall, and demolition crews using huge cranes planned to take down another 27-foot section Friday, said Chris Miller, a spokesman for the city's Office of Emergency Management. (AP Photo/Bebeto Matthews)
New York

A 3-year-old child was injured after falling of a roller coaster in Brooklyn’s Coney Island, located in New York City.

Law enforcement sources told the New York Post that the boy fell off a “kiddie coaster.”

Specifically, the child was on a ride at Deno’s Wonder Wheel Amusement Park when he fell.

The boy suffered a broken leg and cuts.

He was listed in stable condition at a nearby hospital.

The FDNY told MyFoxNY.com that the child suffered “multiple traumas” and is at Lutheran Hospital. He is conscious.