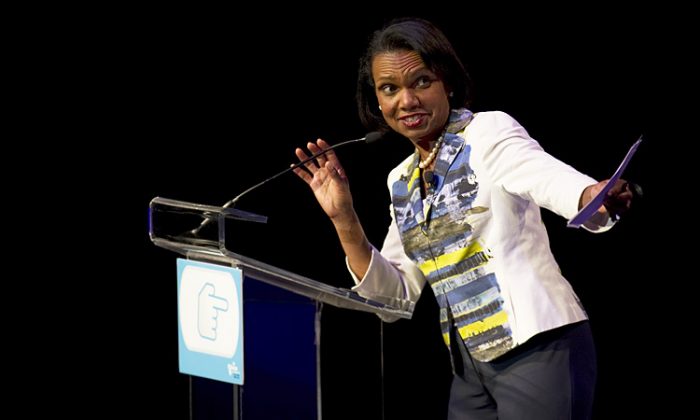 Former U.S. Secretary of State Condoleezza Rice gestures while delivering a speech at the National Auditorium in Mexico City on September 9, 2011. Condoleezza Rice recently said that the Wang Lijun - Bo Xilai scandal in China raises questions about the strength of the rule of law in the country in the context of its authoritarian political system. (Yuri Cortez/AFP/Getty Images)
China

Former U.S. Secretary of State Condoleezza Rice said that the recent scandal in China—the ouster of former Chongqing Party chief Bo Xilai, the attempted defection of his lieutenant Wang Lijun, and the ongoing political repercussions—raise questions about the strength of the rule of law in the country in the context of its authoritarian political system.

Rice made her remarks at the Heritage Foundation in Washington on April 13 after a speech about American exceptionalism, in response to a question by Voice of America.

“The Bo Xilai case gets interesting and intriguing,” she said. “But I really think the big question is, what does it say about China itself, how politics gets done.”

She said she was interested in “ultimately how the Chinese people would respond to what is in fact one of the biggest political scandals in the country’s history.”

When people know what is going on in their country, “they start to want to do something about what is going on,” she said. Rice said this might present a challenge to the leadership as it prepares for the Party Congress this fall, where a smooth handover of power to a new generation of communist apparatchiks is supposed to take place.

China’s political system needs to move beyond a focus on simple material prosperity, Rice said. “Legitimacy based on prosperity tends not to last very long because people’s expectations keep growing; people become concerned about princelings, who drive around in Ferraris, the grandchildren of the revolution in a state that is somehow supposed to be dedicated to social equality. So China has a lot of challenges,” she said.

“I suspect if we were in the hall of the meeting room getting ready for the 2012 Party Congress, people might be asking how the political structure could accommodate some of these pressures ‘without becoming Gorbachev,’ which of course is everybody’s great fear—you try to reform from the top and you end up collapsing the system.”