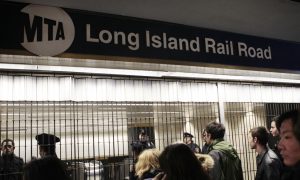 About 5,400 Long Island Railroad unions plan to strike starting July 20, impacting 300,000 daily riders and the businesses in the region. According to New York State Comptroller Thomas DiNapoli, the strike would result in $50 million lost in economic activity every day.

“A LIRR strike would cause headaches and financial hardships for riders and businesses. It would also be another devastating blow to a region that is still struggling to recover from Superstorm Sandy and the recession,” stated DiNapoli. “Both sides must go the extra mile to reach a reasonable settlement so we can avoid the costly impact of a strike and the millions of dollars in lost economic activity.”

Though LIRR is mainly a commuter railroad, the strike would come at peak tourism season and in turn affect sales tax receipts and local government revenue. Tens of thousands of New Yorkers also ues LIRR to get to the Hamptons, Fire Island, Montauk, and Long Beach.

On Monday union leaders confirmed plans for a strike this coming Sunday. The unions and Metropolitan Transportation Authority have not been able to reach a deal despite two presidential emergency boards mediating the negotiations over the last six months. Governor Andrew Cuomo and federal lawmakers have both told the railroad management and unions to work out something on their own.

MTA has detailed a contingency plan involving ferries, buses, and parking lots, but is encouraging as many commuters to work from home or stay with someone in the city in the event of a strike.