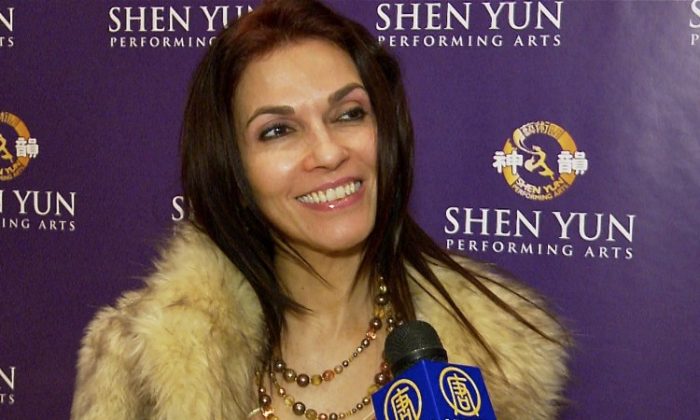 Yamira Santieli found “the way they related the music to the feelings of people, and trying to project that into the audience, was put together amazingly.” (Courtesy of NTD Television)
News

“It was beautiful,” said Yamira Santieli, a composer and musician. “It was quite interesting to see the mixture of the different instruments—with the classical [Western] and ethnic Chinese instruments. It was very beautifully orchestrated. I liked it very much.”

At the heart of a Shen Yun performance is classical Chinese dance, rich with expressive power and grounded in 5,000 years of divinely inspired traditional culture, according to the New York-based company. A unique orchestra accompanies the dancers, bringing a fresh, harmonious sound.

“A Western philharmonic orchestra plays the foundation, while traditional Chinese instruments lead the melodies. The ensemble at once expresses both the grandeur of a Western orchestra and the distinct sensibilities of China’s 5,000-year-old civilization,” according to the company’s website.

Ms. Santieli found “the way they related the music to the feelings of people, and trying to project that into the audience, was put together amazingly.”

After communist rule nearly destroyed the ancient Chinese culture, along with its profound principles such as benevolence, wisdom, and honor, as well as a reverence for the heavens and the divine, Shen Yun was formed to revive the culture and show it to the world, according to the company’s website.

“I thought that was beautiful because [Shen Yun] gave a real integration of the spiritual, fantasy world with the reality of crucial truth of what’s happening right now in China,” Ms. Santieli said.

From the dawn of Chinese civilization 5,000 years ago, the audience is taken on a journey through time—across the vast country with different ethnic and folk dances—and space—up through different dynasties and with a selection of legends and tales.

A couple of contemporary dances portray the current persecution inside China of the spiritual practice Falun Dafa.

“Falun Gong, also called Falun Dafa, is guided by the principles of Truthfulness, Compassion, and Tolerance. It has helped over a hundred million Chinese people understand and return to the essence of traditional Chinese culture—Confucian, Buddhist, and Taoist schools of thought,” states Shen Yun’s website.

The ethnic dances, stories and legends, including the dances set in modern times, were “very well put together because it gives hope to people,” said Ms. Santieli. “At the same time, it teaches people about faith and that there is a strong spiritual culture in China. Amongst all the horrible things that are happening there right now, the spirituality remains as the strongest tool, I believe.”