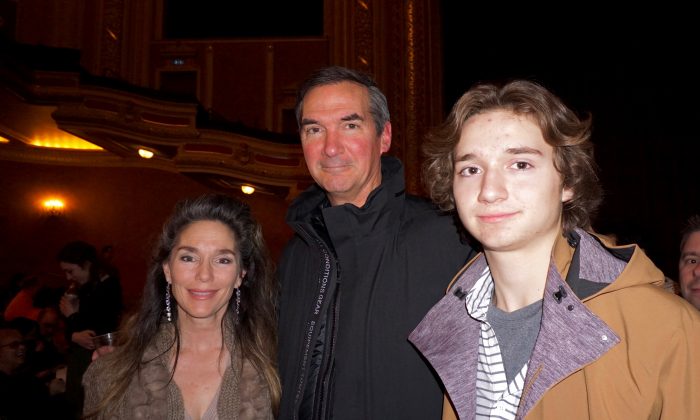 MINNEAPOLIS—Thomas Kaiser’s career has brought him to China possibly more than 20 times. After seeing Shen Yun Performing Arts, he felt it communicated “a message that reflects the time and the society … a celebration of life, just like the challenges that exist in China.”

Mr. Kaiser is president and CEO at Infinite Edge Technologies, LLC, a company that specializes in windows, doors, and glass. He, his wife, Terry, and their high school-age son attended an evening performance of Shen Yun on Feb. 19 at the Orpheum Theatre.

“The music is amazing, that’s what’s most appealing to me,” said Mr. Kaiser, who is also a pianist. “I find it to be both energetic and comforting at the same time. It reaches high notes and low notes, and yet it requires the dancers to keep up, and that’s important. They’ve been able to capture the dances and the settings that make it an amazing show.”

He found the dancing and the athleticism to be spectacular. “It’s pretty amazing how well they’re synchronized,” he said.

Mr. Kaiser commented that the performance seemed to capture the history of China in a much different way than Americans are accustomed to, in the sense that as far as ancient culture is concerned “we Americans are so young compared to Chinese … we have lots to learn about respecting history and tradition.”

“Experiencing the sound of the orchestra, the movement of these dancers, the feeling that’s coming from their eyes and their body, it’s totally encompassing,” Mrs. Kaiser said.

Mrs. Kaiser was deeply touched by the segment of the performance which depicts modern day China and the ongoing persecution of Falun Dafa. Despite her feeling that this part was very sad and emotional, she commented, “I loved … and the joy of just movement and life and I loved that part.”

Falun Dafa is a peaceful meditation practice that is grounded in the principles of Truthfulness, Compassion, and Tolerance. It has been suppressed by the communist regime since 1999.

What stood out the most to Mrs. Kaiser, as an artist, were the handmade costumes, the digital interactive backdrops, and the music. “It’s wonderful to hear the original music. Whoever is doing the costumes, it is incredible. I love the color, the brightness, it’s beautiful,” she said.

The Kaiser’s son, Thomas Jr., at first didn’t know what to expect. But after seeing Shen Yun, he said, “It’s spectacular … It made me feel happy. It’s like a good vibe coming off of them.”

Mrs. Kaiser had already been talking up Shen Yun to her friends prior to coming, but now that she’s seen the performance, she’d tell them “it’s everything that I thought and hoped for.”