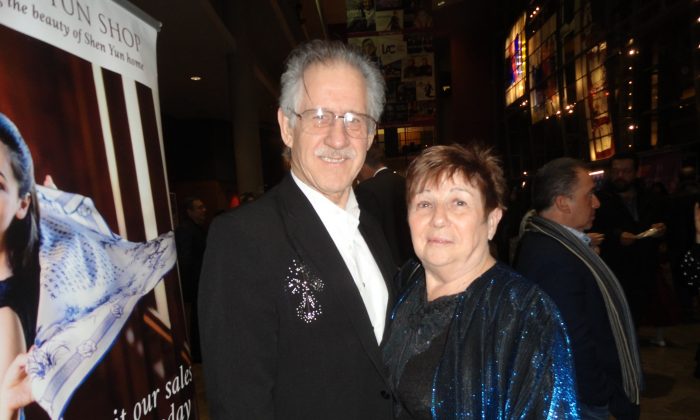 “I’ve been waiting for years to come see this. It’s just amazing. I have goosebumps,” said company founder and entertainer James Cormier after seeing Shen Yun on Jan. 11 11 at the Living Arts Centre.

“The choreography, the music, everything is just outstanding,” he added.

Shen Yun, the world’s premier classical Chinese dance and music company, stopped in the Canadian city as part of its global tour that will take its six equally large companies to more than 100 cities.

“This is the top, this is the best there is,” said Cormier, founder of Serving our Seniors Online Program, an organization that supplies products and services to seniors across Canada. He attended Shen Yun with his wife Doreen Presland.

The couple was also impressed by the spirituality they saw in the performance.

“When you have people portraying their spirituality through dance, the feeling, the connection with the audience is just amazing, said Cormier.

“They take, I think, a step further in showing us through dance, through music that there’s more levels than just that one. Just sitting there watching, they can actually bring you into the music, to the feeling that they feel. Even the expressions on their face, we’re close enough to see that, it’s amazing.”

Established in 2006, New York-based Shen Yun has set out to “revive the lost world of traditional Chinese culture and share it with everyone,” according to the company website. Many of these traditions are said to have been divinely inspired, and Shen Yun presents them through works of classical Chinese dance, as well as ethnic and folk dance.

“I believe that there’s divine in everything. This portrays it more. This is like being in nature and having the nature come alive, like trees and flowers and everything come alive as you are walking through a forest or something. That’s what they’re doing,” he said.

Cormier has worked as a musical entertainer for many years and he knows to appreciate every detail of a performance.

“The costumes, the colors and the coordination between the special effects and the dancing— it’s flawless. I look, because I’m an entertainer, I look for small little things and there’s nothing. It’s just amazing.”

He was also taken aback by the artistic interpretation in Shen Yun.

“How they portray the characters—it’s amazing. The costume change and then to be getting into a character instantly is a very, very hard thing to do … that is a talent, you have to be above the above, a tier above the best, and they are.”

Presland noted she was also touched by the beauty of the music. “It’s so calming and peaceful and relaxing,” she said.

“This is really up our alley, we just love it, coming here to see this. It’s once in a lifetime thing. Definitely. I would definitely recommend everyone to come and see it, no matter at what age. Everyone can get something from this. It’s amazing,” said Cormier.