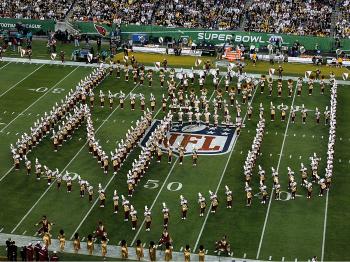 A marching band performs during the pre-game show prior to the start of Super Bowl XLIII between the Arizona Cardinals and the Pittsburgh Steelers on February 1, 2009 at Raymond James Stadium in Tampa, Florida. (Doug Benc/Getty Images)
Business & Economy

Companies Keep Their Faith in the Super Bowl

Antonio Perez
View profile
Follow
biggersmaller
Print
NEW YORK—The worldwide media slump has not affected Super Bowl ads. The biggest advertising event of the year is less than a month away, and like previous years, ad spots sold out quickly.

But there are industry headwinds indicating that some advertisers may be looking to shift—and conserve—their ad dollars. Pepsi-Cola for the first time in 23 years will not air any Super Bowl commercials on television, instead choosing to focus on Internet and social media advertising.

Nonetheless, as of last week, CBS—the network that hosts the NFL championship game on Feb. 7—has sold 95 percent of its 30-second spots airing during the big game. The network, according to Advertising Age magazine, is charging between $2 million to $3 million per spot.

"No matter what anybody says, it's the biggest TV audience in the world," said Professor John Verret in an interview with CNN. "On a cost per thousand basis, it's very efficient."

Last year, ratings agency the Nielson Company said that 98.7 million viewers tuned in to watch the game, easily the biggest audience for a television for 2009.

Pepsi-Cola’s decision may be unnerving some media executives. Last year, its parent PepsiCo spent $33 million to promote its drinks and snacks via Super Bowl ads, according to TNS Media Intelligence.

Instead, the company expects to pour its ad dollars into web-based marketing via targeted ads on social-networking sites.

According to Thomas Harpointner, CEO of AIS Media, companies are thinking outside the box to maximize their advertising budget and PepsiCo’s decision underscores the increasing prominence of Internet marketing. AIS Media is a leading e-business consultancy and interactive consulting company.

“Driving traffic to the Web via the Super Bowl has been very effective,” Harpointer said. Some advertisers saw an increase “to the tune of about 5 million users to their Web site in a 24 hours” using a combination of TV and online spots.

Harpointer credits the economic recession as well as the effectiveness of online interactive marketing for the shift.

“Affluent people are Internet and computer users, and it’s a lot cheaper to reach those customers via the Internet,” he said. And with online ads, “They [businesses] can see exactly how much money they made on the ad, how many clicks and how much money was made on the sale.”

Anheuser-Busch, the St. Louis-based brewery, bought the most airtime this year, according to CBS. Another annual sponsor, Atlanta-based beverage company Coca-Cola Co., will be airing spots as well. Other Super Bowl veterans, such as online brokerage firm E*Trade and job-search Web site Monster.com, also return.

"Being a part of the big game gives us access to nearly 100 million viewers,” said Tony Jacobs, vice president of marketing for Dr Pepper. “We're taking this opportunity to reach as many fans as possible to promote our innovative Dr Pepper Cherry flavor and celebrate our 125th Anniversary. This is just the right ad at just the right time.”

While PepsiCo stated that Pepsi-Cola would not be featured in the Super Bowl, Frito-Lay will continue to advertise in the big game.

General Electric Co. General Motors Co., and FedEx Corp. said they would not advertise this year due to cost constraints.