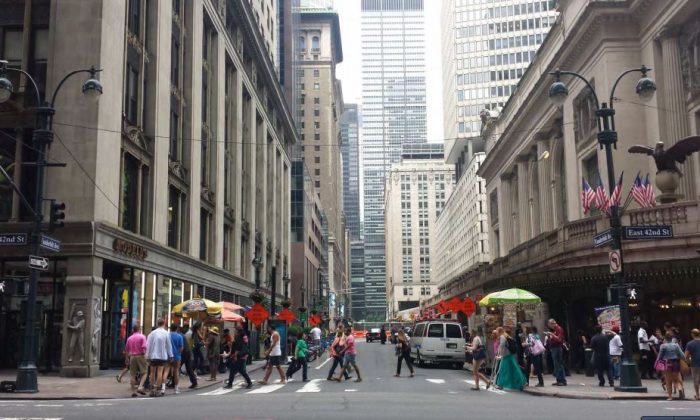 The site of the proposed One Vanderbilt building, west of Grand Central. (Department of City Planning)
New York

Public review has started for developer SL Green’s plans for the 60-plus story One Vanderbilt office building across from Grand Central, and community members and unions are voicing great support.

The rezoning for the tower is part of a five-block proposed rezoning of the Vanderbilt Corridor from 42nd Street to 47th Street—a fast-tracked portion of the once highly contentious East Midtown rezoning.

At a public hearing Monday night, several union representatives and members, community members, and representatives of groups including the Municipal Art Society, Regional Plan Association, Association for a Better New York, Metropolitan Transportation Authority, Real Estate Board of New York voiced support for the rezoning. Many spoke in favor of the transit improvements proposed.

And in the midst of overwhelming support, representatives of Grand Central’s landlord continued to oppose the project, calling it a rushed rezoning favoring one corporation.

Midtown Manhattan was, for years, the premier site for Class A office space and is still one of the city’s major tax bases. But in the last two decades, only five new office buildings have been developed in East Midtown, a 73-block area restricted by outdated zoning.

Existing offices are filled with columns that get in the way and floorplates that do not fit tenants’ needs. To tear down an old office building in the area and build a new one in its place would mean building a smaller building.

Former Mayor Michael Bloomberg had proposed rezoning East Midtown, but the details of the plan remained uncertain and the plan was eventually withdrawn in the last days of his term. Mayor Bill de Blasio quickly promised a rezoning would still happen by the end of 2014—”but it must be done right.”

At a public comment session held at the New York Public Library on 42nd Street, Planning Commissioner Carl Weisbrod highlighted changes made to the proposal to address the community’s previously raised concerns. The plan had always been to require infrastructure upgrades for larger developments, but the amount of payments seemed speculative and transit improvements could be implemented after density had already increased in the area.

Now infrastructure upgrades need to be done before the building is built and details of the upgrades have to be made public. There will also be no as-of-right density increases, Weisbrod said, which means all developments will have to go through public review.

SL Green is committing $210 million to infrastructure improvements, and will be responsible for any cost overruns on the improvements the company has agreed to make.

The majority of the upgrades will be made to improve the Lexington line.

The platform for the 4/5/6 trains at Grand Central has several wide, bulky columns in front of stairs, which often block and slow down commuters getting on and off subway cars on an already congested platform. It slows down boarding, which slows down trains and trips overall, MTA engineers have said.

By narrowing the columns, narrowing the stairs, and adding more stairwells, this will add one additional peak-hour train every rush hour. This was part of a plan MTA had intended to implement starting January 2015, but SL Green would foot the bill and do the work as a part of rezoning. It would also renovate the upper level, narrowing columns so there is more space and there are clearer paths.

Developers also have plans for a public plaza but there is no design yet.

In 1992, the district around Grand Central was zoned to let landmarks like Grand Central and other buildings transfer development rights.

“That hasn’t really worked,” Hsu-Chen said. To date, only one building has made use of those development rights, and less than a quarter of the nearly 2 million square feet of Grand Central’s development rights have been sold.

This is because on top of buying development rights from a landmark in order to build a taller building, the developer would also need to make public realm improvements, Hsu-Chen said.

This new proposed rezoning basically lets the developer choose one or the other (though the city may choose to negotiate for both in some cases, Hsu-Chen added).

It is meant to make it easier for landmarks to sell their development rights, Hsu-Chen said. But Grand Central’s landlords have said it does the opposite.

Thus, Argent Ventures is advocating for delaying the Vanderbilt Corridor rezoning until after the comprehensive East Midtown plan is released. Ultimately it wants to see the One Vanderbilt project be built under the existing zoning, which would require purchasing Grand Central’s development rights plus the public realm improvements.

A few other speakers, including a representative from the New York Landmarks Conservancy, spoke in opposition of One Vanderbilt and advocated for Argent Ventures’ position.

Most other speakers supported the plan fully. Some voiced support but said SL Green could do more, such as seeking a LEED Platinum qualification instead of LEED Gold. Municipal Art Society planning fellow Alison Brown supported the plan but said she would like to see more of the building be publicly accessible.