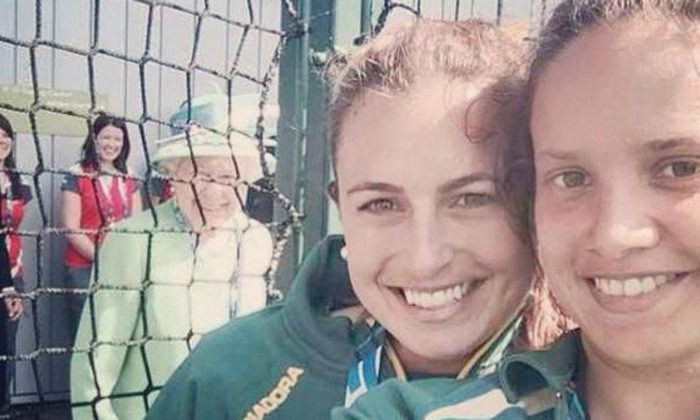 Hockeyroos Jade Taylor and Brooke Peris hit the jackpot when they took a ‘selfie’ at the Commonwealth Games in Glasgow on Thursday July 24, 2014. Hoping to catch the Queen in the background of a ‘selfie’ photo as she emerged from a doorway, Queen Elizabeth II immediately aware of what was happening made a broad smile at the smart phone. (Jade Taylor and Brooke Peris)
International

Two Aussie Hockey players, Jayde Taylor and Brooke Peris got the first “Gold” scoop of the Games. Taking a “selfie” they hoped to capture Queen Elizabeth II in the background as she emerged from a doorway on Thursday July 24. They hit the jackpot when the Queen obliged by smiling at the camera from the other side of the fence just at the right time, showing the British Queen’s media smartness. The subsequent tweet went viral gaining worldwide coverage.

The 20th Commonwealth Games, held in Glasgow (July 23 to Aug 3) is an extravaganza involving over 1000 athletes from 71 nations and territories. With 29 events over 8-days of competition the Games are still a major event.

The main “on the track” attraction is expected to be Usain Bolt, the fastest man in the world, (if he runs, as promised), in the 4×100 relay heats tomorrow, Friday Aug 1. He is just recovering from a left foot injury, but says that he will take part—not in the individual events but in the relay.

England had a clean sweep in the Triathlon—1500M swim, 40 KM Cycle and 10KM run—with wins in the Team Relay, Men’s and Women’s events.

For the Women, Flomena Daniel and Caroline Kilel both of Kenya took Gold and Silver respectively with Jess Trengove of Australia taking the Bronze Medal. Shelly’s win was the first by an Australian for 20 years.

Shooting
Mick Gaut, 60-year-old Englishman came out of retirement to take a Bronze Medal in the 10 metre air pistol final to win his 18th Commonwealth Medal, equaling the record of Peter Adams of Australia. He entered the 50 metre air pistol event and failed to win a medal but had one more chance to clinch the record outright in the final of the 25 metre event.

Rugby Sevens
In the Rugby Sevens South Africa overcame New Zealand 17-11 to win the final to take Gold. Stopping the Kiwi juggernaut must have given South Africa immense satisfaction particularly after South Africa tailed off rather badly towards the end of the 2013-14 HSBC International Sevens.

Australia picked up the Bronze Medal with a 24-0 win over Samoa. England won the Plate in a tight 17-15 Final against Wales.

In the Women’s Squash Singles Final, World Champion Nicol David of Malaysia secured a convincing 3-0 win over the No.2 seed Laura Massaro of England to take the Gold Medal. After a tough first game which ended in David’s favour at 12-10, David took the next two games 11-2, 11-5 to lift the Gold. Massaro won Silver and Joel King of Australia beat Alison Waters of England to take the Bronze Medal.

Women’s Fours Gold was won by South Africa beating Malaysia 14-9 and the Bronze was won by New Zealand who defeated Scotland 21-15.

The finals of the Men’s Singles and Fours and Women’s Pairs are tomorrow Friday Aug 1. The Women’s Triples competition culminates today Thursday July 31.