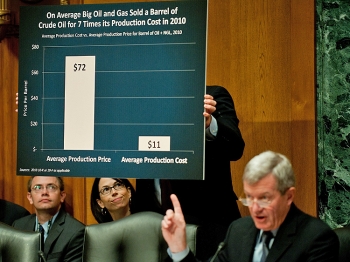 Commodities Speculators Are At It Again

With gasoline prices skyrocketing, U.S. consumers are less confident that the economy is climbing out of distress, according to the latest Bloomberg Consumer Comfort Index, which fell 0.7 points from the prior week to -46.9 by May 8. In the five week period since April 3, the index dropped by 2.4 points from a reading of -44.5.

The Consumer Comfort Index can range from +100 to -100, with zero meaning that on average, survey respondents were neutral about the state of the economy. The index has a margin of error of +/-3 percent.

“Consumer confidence, which had declined sharply in March, posted a modest gain in April. … Although confidence remains weak, consumers’ assessment of current conditions gained ground for the seventh straight month, a sign that the economic recovery continues,” said Lynn Franco, director of The Conference Board Consumer Research Center, in a recent press release.

The Rasmussen Consumer Index agrees with Bloomberg and reports that consumer confidence dropped daily, falling five points by May 11.

“From a longer perspective, consumer confidence is up two points from a month ago and down 10 points from three months ago,” stated a May 11 Rasmussen Reports LLC press release.

According to the IBD/TIPP Economic Optimism Index, May has been a pivotal month, despite increasing gas and food prices. The six-month economic outlook index has increased by 9 percent to 42.3, where an index above 50 shows optimism and below 50 signifies pessimism, according to a May 10 press release.

“The IBD/TIPP Economic Optimism Index has a good track record of foreshadowing the confidence indicators,” claims an article on the Tipp website.

The difficulty is in making sense of the different indexes, which can change daily and often depend on the point in time when the index numbers are reported.

Simply put, when prices go up around the time the index numbers are collected, confidence will decrease, while the opposite happens when consumers pay less for their daily purchases.

According to research, consumers’ disposable income, which is the income a consumer can spend after taxes are paid, has been steadily rising over the past months. But spending has not kept pace with the increases in disposable income.

In April 2008, average daily consumer spending was at $139. Since 2009, it has fluctuated between $109 and $112 for consumers earning at least $90,000 annually, remaining almost flat on a daily basis, according to the website MarketingCharts, a Watershed Publishing publication.

While consumers “have the disposable income to spend more freely when they choose, they have not done so during the first four months of 2011. Instead, upper-income spending has been largely consistent with the depressed levels of 2009 and 2010,” according to a chart discussion on the MarketingCharts website.

“The recent plunge in commodities prices confirms what everyone knew all the time—inflation is being driven by commodities speculators who are profiting from everyone else’s collective misery,” accuses Mark Sunshine in an article on the Sunshine Report website.

Sunshine blames Washington for letting commodity speculators run wild instead of reining them in.

The Federal Reserve Board (Fed) in Washington has the power to regulate the industry, but has so far not shown any interest in getting involved. In the latest Sunshine Report, Sunshine suggests that the Fed should step up and stop the banks from “funding, investing, clearing or facilitating derivatives commodity trading.”

Years ago, manufacturers and consumers traded in commodities based on the economic market theory of supply and demand. This function has been dominated in recent years by risk takers through short selling.

In layman terms, speculators borrow securities with the assumption that a price will decline. Then the securities are sold, and once the price plunges, they buy them back at a lower price, pocketing the difference before returning the securities to the actual owner.

“Prices that used to be determined by producers and users of commodities are now set by financial speculators making naked bets on how much price pain consumers can endure [when buying commodities] without breaking by buying and selling derivatives commodity contracts,” accuses the Sunshine Report.
Read More…Speculating in the Commodity Market