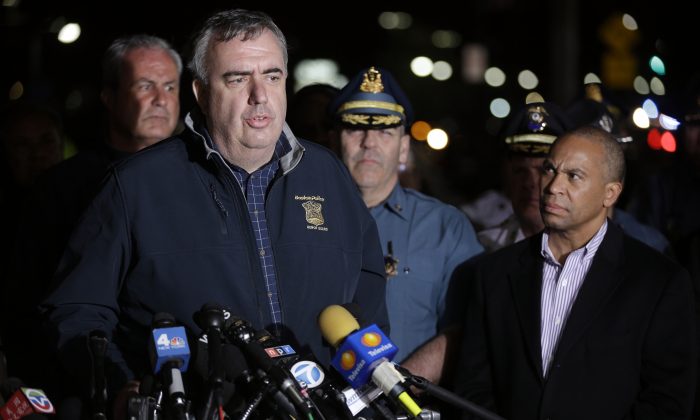 Boston Police Commissioner Ed Davis, at podium, speaks while accompanied by State Police Col. Timothy Alben, second from right, and Massachusetts Governor Deval Patrick, right, during a news conference, after the arrest of a suspect of the Boston Marathon bombings in Watertown, Mass., April 19. (AP Photo/Matt Rourke)
US

Dzhokhar and Tamarec Tsarnaev “were going to attack other individuals,” Davis told CBS’s “Face the Nation” on Sunday.

At the crime scene were the two brothers engaged with police in a battle on Thursday night, there were unexploded devices and weapons, Davis said.

Elaborating on the crime scene, the brothers had “250 rounds of extended ammunition” and said that “several explosive devices went off, they were homemade,” Davis added.

“There have been published reports that the top of the pressure cooker was discovered, and my officers reported to me that there was an extremely loud explosion followed by smaller ones as they engaged in the gun battle with the suspect so they had IEDs, they had homemade hand grenades that they were throwing at the officers,” he said.

On Sunday, officials said that Dzhokhar Tsarnaev, 19, is awake in a Boston Hospital and is responding by writing questions, a law enforcement official told USA Today.

Tsarnaev reportedly was wounded on Friday night while he was hiding in a boat parked in a man’s backyard in Watertown, Mass. He was soon after captured by police and taken to the hospital.

Investigators are also looking to see if Tsarnaev’s neck wound was self-inflicted.

Prosecutors are looking to draft up a criminal complaint against him.

Davis, however, said that Tsarnaev, 19, was “not in any condition to be interrogated” and said his condition only improved in the past few hours.

Tamerlan Tsarnaev, 26, died after sustaining injuries in a shootout on Thursday night.

“All of the information I have is they acted alone, these two individuals, the brothers,’’ he said on ABC’s “This Week.’’

“The older brother’s dead now. We have the second one … in very serious condition,’’ he said, adding that “we don’t know if we’ll ever be able to question the individual.”